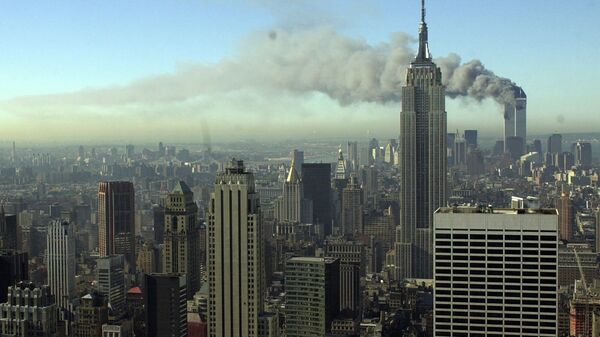 Khalid Sheikh Mohammed, who was named by the US as one of the main architects of the 9/11 attacks and is currently being held at the Guantanamo Bay detention camp in Cuba, recently indicated that he would consider helping 9/11 victims in their lawsuit against Saudi Arabia if the US government decides not to seek the death penalty against him.

Mohammed’s offer was filed in the US District Court in Manhattan Friday as part of a federal lawsuit against the Saudi government by victims and families of victims of the 2001 terrorist attacks, which killed over 3,000 people in New York, northern Virginia, and Pennsylvania.

Lawyers for the plaintiffs contacted three out of five Guantanamo Bay detainees accused of being involved in the terrorist attacks to obtain depositions, according to the Wall Street Journal. Mohammed’s attorney said he would not consent to a deposition under current circumstances but noted that “in the absence of a potential death sentence, much broader cooperation would be possible.”

However, Mohammed’s current position appears to be quite different from the one he took at a June 2008 Guantanamo hearing. When a military judge described the hearing as a “death-penalty case,” Mohammed referred to it as a “martyr case” instead.

“This is what I wish. I’ve been looking to be martyred for a long time,” Mohammed said at the time, according to the Wall Street Journal.

“A lot has happened in the past 10 years,” a person familiar with the proceedings recently told the Journal. “The 9/11 defendants are not as interested as they once were in martyring themselves.”

The Saudi government has long maintained it was not involved in the 9/11 attacks.

In 2014, freelance writer Brian McGlinchey launched the 28Pages project to expose links between Saudi Arabia and the 9/11 attacks. The project is focused on declassifying 28 pages of a congressional report on the US Intelligence Community’s activities before and after the terror attacks, according to the project's website.

The US government partially declassified those 28 pages in 2016, but conducted about 90 redactions "due to national security" concerns that remain in place, according to the declassification review led by the Office of the Director of National Intelligence.

The partially declassified report released by Congress in July 2016 exposed that Saudi officials had direct connections to the 9/11 hijackers and possible involvement with supporting the attacks themselves. The report also showed that the FBI inexplicably failed to communicate to the CIA information about financial ties between Saudi royals and the 9/11 hijackers before the attacks. Of the 19 hijackers, 15 were Saudi Arabian citizens.

On Monday, US President Donald Trump also authorized the extension of the 9/11 Victim Compensation Fund, which was first established to compensate victims of the attack. The extended legislation means victims’ medical claims will be funded until 2090.