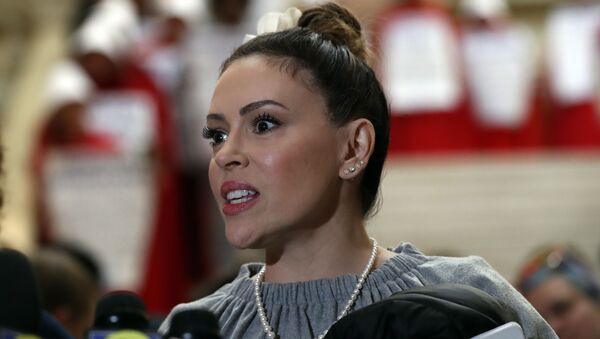 © AP Photo / John Bazemore
Subscribe
Actress-turned leftist political campaigner Alyssa Milano has stirred controversy after she referred to the reinstatement of the death penalty as the murder of “actual” people.

The celebrity has again stirred outrage among conservatives when she stressed that pro-lifers’ arguments were invalid after the Trump administration announced that the federal government would end the death penalty moratorium for the first time since 2003.

"Your administration just reinstated the death penalty and scheduled 5 executions of *actual* people", Milano responded to a Twitter user who had criticized her support of Planned Parenthood. "You’ve lost the right to pull your, 'pro-life' narrative-talking-point- b------t with me".

Attorney General William Barr stirred the ire of Democratic presidential candidates when he allowed the federal government to resort to executions for the first time in over 15 years.

In particular, the attorney general ordered the executions of five death-row inmates, including a convicted murderer and white supremacist, a child murderer, a man who raped a 16-year-old girl before dismembering her, a man who sexually molested and killed his two-and-a-half-year-old daughter, and another man who was convicted of killing five people.

The legal initiative has given a new twist to the birth control debate, as to whether someone could really be unconditionally pro-life, but at the same time okay executions. Pro-lifers have been scrutinising Planned Parenthood's annual abortion rate, citing worrisome statistics of some 300,000 terminations annually.

Milano’s tweet caused a storm online, with many calling her out for “ridiculously” comparing the incomparable:

"Are you actually comparing the lives of convicted rapists and murderers to those of innocent, unborn children?" actress Mindy Robinson asked Milano. "Is that REALLY the dumb a-- comparison you're making right here?" one person tweeted, while another extrapolated the issue further to the broader Democratic approach:

Others brought up Milano’s categorical stance on “womb heartbeats”, while some dwelled more on the idea that convicted criminals on death row are “not people”:

"So have you Alyssa, you gleefully support the execution of heartbeats in the womb," one user recalled.

The 5 scheduled for execution are not *people*. They're MONSTERS and deserve to be put to death.

"innocent" is the key concept, here, Alyssa!! Babies are "innocent"; the federal inmates slated for execution have been convicted of committing unspeakable crimes. These aren't parking meter violators.

Executions of brutal murderers - seems pretty fair to me!! pic.twitter.com/byXPrG4SzZ

Killing a baby as it’s escaping from the womb makes more sense than the senseless execution of a criminal who committed a heinous crime like murder, rape, kidnapping or all 3 said no sane person ever.

One clearly stated that calling for the execution of violent criminals is well compatible with refusing to kill innocent babies:

Being for the execution of violent criminals and against the killing of innocent babies is much more morally defensible than the inverse.

Abortion has been a hotly contested issue in the United States for years. During Donald Trump’s presidency, the country has introduced several measures (known in a number of states as “the heartbeat” initiative) meant to block, restrict, or repeal pro-abortion laws, and cut federal funding for abortion clinics.