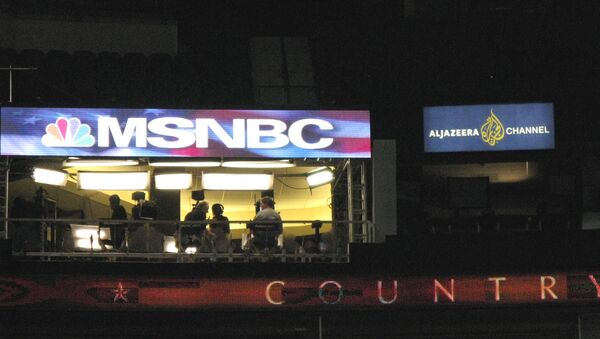 Krystal Ball, co-host of The Hill’s “Rising with Krystal & Saagar,” turned her sights on her former network, MSNBC, blasting them in a Thursday show for drinking “deeply of the Russia conspiracy waters” in the name of chasing ratings.

“Just how much damage has MSNBC in particular done to the left?” asks Ball, who hosted “The Cycle” on the network between 2012 and 2015 and has served as a Democratic strategist and political commentator for years before and since then.

While she notes that all major networks in some form or another “got swept up in the ratings bubble that was feverish Russian conspiracy theories,” she calls out MSNBC as the most egregious offender, noting that of its commentators, “some talent drank more deeply of the Russia conspiracy waters [than others] - Rachel Maddow, you’ve got some explaining to do!”

Understatement is too light a word to describe Ball’s characterization. MSNBC banked essentially its entire financial future and public respectability on the Russiagate conspiracy theory, regularly running segments over more than a two-year period that turned any and every connection between US President Donald Trump and Russia, no matter how tenuous, into a damning tip of a great iceberg of intrigue. Trump, the real-life Manchurian Candidate, paid fealty directly to Russian President Vladimir Putin, and Special Counsel Robert S. Mueller III was going to tear down the curtains for the whole world to see - at least, in the minds of MSNBC marketing strategists and the network’s army of talking heads, show hosts and commentators.

That all of this dovetailed almost perfectly with a growing effort inside the US intelligence community to block or oust Trump from the presidency is all the more shameful. Networks, including MSNBC, played a key role in turning a US political current historically skeptical of repressive and secretive state organs like the CIA and FBI into their strongest cheerleaders. Under the nonstop propaganda bombardment, US liberals forgot that Mueller played a key role in selling the lie of Iraqi weapons of mass destruction to Congress and the American public in the winter of 2002-2003, and began lionizing him and his lieutenants for their deeply worrisome excuse-making for spying on US citizens.

It was scandalous enough when limousine liberal staple The New Yorker gave its reporter Jonathan Chait the space in July 2018 to air the fever-dream that Trump had been a Russian KGB asset since 1987 - all the more so when MSNBC gave Chait a national television platform to present the theory as legitimate, complete with the credulous acknowledgment that it’s “probably not true - but it might be!”

Ball also notes that the network hosted “conspiracy theory gadfly Louise Mensch,” who never found a circumstance so mundane that she couldn’t link it to Russian malevolence.

However, Ball is careful to hedge her criticism, noting, “I am not a Glenn Greenwald, who thinks this was all ridiculous and that the Trump campaign did nothing nefarious vis-a-vis Russia.” So much the worse for her, since it shows she still, ultimately, is okay sipping from the Kool-Aid that Maddow and Chris Hayes drank in draughts.

“Like most corporate entities, MSNBC is a die-hard member of the green party,” Ball states, “and I’m obviously not talking about climate change here. Russia conspiracy was great for ratings among the key demographic of empty-nesters on the coast with too much time on their hands.”

Indeed, coverage of Russiagate helped swell the network’s ratings and drove continued financial success. In 2017, MSNBC was the only network to boast a net growth in its primetime audience, seeing its viewership swell by over half a million Americans and catapulting it into the third-place slot for most watched network in the country in both primetime and total day viewers. In 2018, it posted a further 12% increase in viewership, sliding into the number 2 network slot, second only to Fox News Channel, according to Adweek, citing Nielsen data.

This is also the line of denial that Maddow has taken. Sad how the "Mueller was compromised by Russia!" joke is playing out almost beat for beat... https://t.co/PmV0ditgaL

However, like the Faustian bargain of myth, Mephistopheles eventually came to collect his debts, once the Russiagate well ran dry: MSNBC’s ratings plummeted in the days and weeks after Mueller delivered his report to the Department of Justice in April 2019, with Maddow alone losing hundreds of thousands of viewers. May 2019, the month after Mueller’s report was released, MSNBC saw a 26% drop in the primetime demo and a 32% drop in total day demo, as compared to May 2018, according to Nielsen.

By comparison, Maddow’s evening arch-nemesis at Fox, Sean Hannity, saw his ratings spike as Maddow’s fell, garnering a 32% increase in his audience in the days that followed Mueller’s submission, AP reported at the time, citing data by Nielsen.

Commentators from across the spectrum blasted the mainstream media for two years of windmill-tilting, with right-wing National Review’s Rich Lowry noting “the 3 biggest losers from the Mueller report in order - the media, the media, the media.” Politico said the media was “star[ing] down a reckoning,” and The Intercept’s Glenn Greenwald demanding “major accountability” for “2 years straight in unhinged conspiratorial trash, distracting from real issues.”

If there's no media reckoning for what they did, don't ever complain again when people attack the media as "Fake News" or identify them as one of the country's most toxic and destructive forces. They've earned those attacks.

​“Rachel Maddow makes *$10 million a year.* Every month, more money is put into her bank account by a major corporation than most people make in a lifetime, literally. She went on the air for 2 straight years & fed millions of people conspiratorial garbage & benefited greatly. If there's no media reckoning for what they did, don't ever complain again when people attack the media as ‘Fake News’ or identify them as one of the country's most toxic and destructive forces,” Greenwald wrote on Twitter.

“They've earned those attacks. All MSNBC hosts have millions upon millions in their bank accounts. It will buy massive third homes and boats, but it won't erase the role they played in going on TV every day and manipulating people's fears and disseminating a fake conspiracy theory that rewarded them greatly.”

However, even after Mueller’s report was submitted and the new liberal bete noir became Attorney General William Barr, for MSNBC and its ilk, “one key element remained: Mueller the hero, the white knight who would come riding in at the last moment to convince those independent Middle America women that Trump was the crook and the scoundrel that we said all along,” Ball noted. “Needless to say, the white knight rides no more.”

Coverage of Mueller’s July 24 testimony won networks big ratings, too: 13 million Americans tuned in to hear the former special counsel demur over 200 times in seven hours about lawmakers’ inquiries concerning the report, according to the Hollywood Reporter, and MSNBC scooping up 2.4 million of those viewers.

It's honestly sad to watch people - after 3 years - still clinging to the hope that Mueller will save them from Trump. You're going to have convince people in 2020 that your party won't be devoted to Goldman Sachs, Silicon Valley & other Dem funders but making their lives better.

​However, one thing Mueller’s testimony didn’t do any more than his report was to vindicate the Russiagate die-hards in the mainstream media: the white knight Mueller still found no evidence of the collusion that MSNBC commentators swore would be unearthed, and his lackluster performance utterly failed to stand up to the grilling given to him by Republican representatives. Likewise, his laconic responses did almost nothing to feed the wild tales spun out by Democrats who seemed dedicated to asking Mueller leading and framing questions that decided what he was going to say before he said it.

The 24-hour mainstream media, dedicated to chasing ratings and money such, is likely to continue trying to draw blood from the Russiagate stone instead of focusing on issues that really matter and are really worth reporting on with all the tenacity devoted to this nothingburger of alleged collusion and disruption by Moscow.

“Now please,” Ball begged Hill watchers and Democrats alike, “can we move the heck on?”