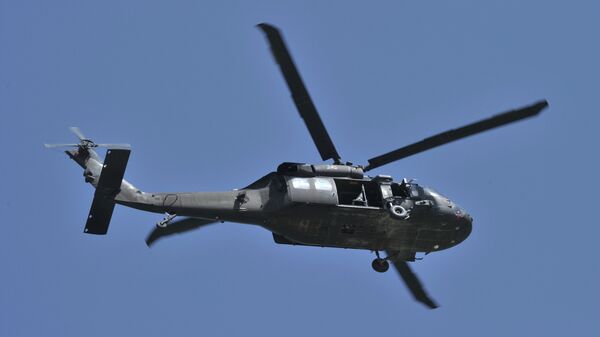 The US Army has been quietly conducting a secret flight operation in and around Washington DC for months, judging from recently released fiscal documents. US military experts have outlined the possible goals of the clandestine mission and the agencies behind it.

On 22 July, Bloomberg revealed that at least 10 Black Hawk helicopters are involved in conducting "a classified flight mission" in the National Capital Region (NPR), citing a $2.5 billion Army reprogramming request.

According to the document, the Pentagon asked the US Congress to allocate an additional $1.55 million for aircraft maintenance, aircrews, travel, and a Sensitive Compartmented Information Facility (SCIF) capability in support of the mission.

Here's the document revealing the U.S. Army's mystery mission in the Washington, D.C. area. Via @ACapaccio

​"Soldiers from assault helicopter company and aviation maintenance units will be supporting the mission with 10 UH-60s and maintenance capabilities for four months", the document says, arguing that "without additional funding, the Army will not be able to perform this classified mission".

The task of the aforementioned flight mission, which, according to Bloomberg, kicked off "early in the fiscal year" that started on 1 October 2018, remains shrouded in secrecy.

Karen Kwiatkowski, a former Defence Department adviser, and Keith Preston, a military analyst and chief editor of Attack the System, have outlined at least three possible goals behind the classified operation:

·         Evacuation of leading officials in case of emergency situations

"The forces that are involved may be conducting surveillance operations", suggests Keith Preston. "They also may be preparing to be deployed or activated in case of an actual emergency situation. We have to remember that the capital was one of the sites of the terrorist actions in 2001 [11 September 2001 terrorist attacks – Sputnik]. The capital area has been on heightened security ever since".

Karen Kwiatkowski presumes that the mission is unlikely to be directly aimed at ensuring the US president's safety, but "probably" envisages "an expansion to preserve and transport lower levels of executive branch personnel".

"In an area already saturated with helicopter response, and fixed wing and osprey type capability, the growth remaining is in extending response and transport to lower levels of the executive branch", he remarks.

"In general it speaks to the DC area as a truly militarised area, with all kinds of organisation operating military and privately funded helicopters to get important people moved around, and for emergency response to their needs. By important people, I mean important to the state", the ex-DoD adviser points out.

What Agency is Behind the Mission

According to Kwiatkowski, "it’s hard to say what [the request] signifies or even which agency is behind it".

"This small amount of an Army request, for a new SCIF, indeed appears to have revealed something far larger in terms of a funding line probably within the United States Special Operations Command (SOCOM)", the former DoD official believes. "My initial reaction is that this suggests simple massive growth and upgrades going on throughout the Pentagon, in an age of Congress’s massive increases in defence spending".

He explains that many missions of political transport and emergency response are conducted by Special Operations Command, adding that "SOCOM funding is notoriously hard to track, and is often filtered through the service financial requests, or supplemented by them".

The release of the Army reprogramming request coincides with the announcement of a critical debt and budget agreement struck by the Trump administration and bipartisan congressional leaders. The two-year $1.37 trillion budget deal envisions a significant boost to the Pentagon's defence spending and suspending the debt ceiling until 31 July 2021.

The increase in military spending at the expense of social welfare programmes has long been an apple of discord between Democrats and Republicans, as the US defence budget has already been growing for the past five years. It appears that the Democratic Party "keeps capitulating" on already bloated defence spending, as The Atlantic pointed out early last year.

The former Pentagon adviser raises the question as to why the mission of SOCOM in the National Capital Region (NCR) would need to grow.

"First, because the money spigot is flowing, and it must be spent", Kwiatkowski says. "Second, the mission may have expanded, either in terms of persons or agencies served or response to new threats. I personally doubt that any new threats exist, but expanding the capability and distribution of helicopter support to the political branches lends itself to flexibility, confusion, deniability, and of course, the most common result, waste of taxpayer dollars and efforts to hide the waste and duplication of effort from the taxpayers".

As The Hill found out on 22 July, the length of the much-discussed mission is "undetermined". According to the media outlet, the US Department of Defence refused to give any further explanations.