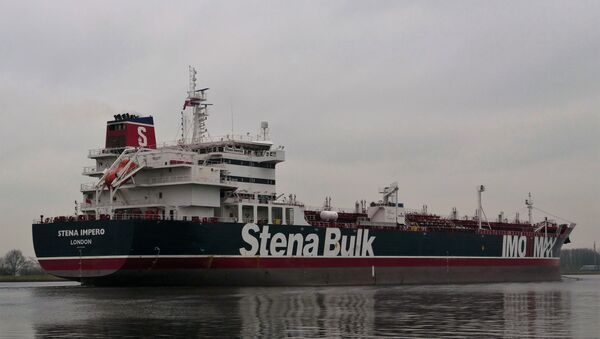 LONDON (Sputnik) - The Swedish owner of the UK-flagged Stena Impero oil tanker, Stena Bulk, said on Tuesday it was still awaiting a response from the Iranian authorities to an official request for visiting the crew of the vessel, which was seized on Friday.

The Iranian military captured oil tanker Stena Impero in the Strait of Hormuz last Friday for allegedly violating maritime rules. Its crew of 23, including three Russians, remain on board the ship, which is anchored in the Iranian port of Bandar Abbas. The shipowner could not contact them, but the Iranian authorities said the members of the crew were healthy, and the tanker was anchored at the port.

"Stena Bulk awaits a decision to the formal request to the Iranian Authorities for permission to visit the Stena Impero and verify the safety and well-being of our 23 much-valued crew members held since July 19," the statement says.

The company noted that it had sent all necessary notifications to the relevant authorities to navigate the vessel through the Strait of Hormuz. Also, the company has no evidence that Stena Impero participated in any clashes.

Stena Bulk also said it was continuing to support family members of the vessel’s crew, which includes citizens from India, Russia, Latvia and the Philippines.

The incident was actually Tehran's response to the seizure of the Iranian tanker by the authorities of Gibraltar on July 4. Oil tanker Grace 1 was suspected of violating EU sanctions against Syria. As part of the investigation of the case, the police detained the captain, his senior assistant and two other crew members. The court extended their detention until August 15.