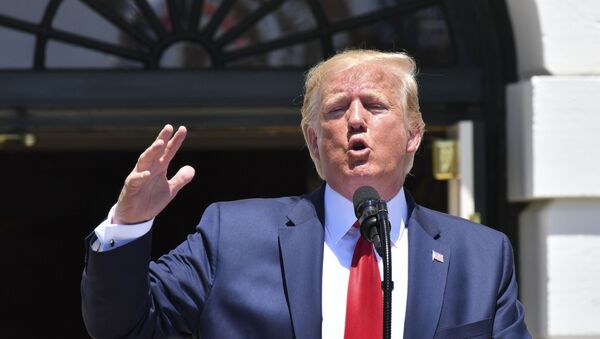 WASHINGTON (Sputnik) - US President Donald Trump said that making a deal with Iran is now harder than before.

"Frankly, it is getting harder for me to make a deal with Iran," Trump told reporters on Monday during a meeting with Pakistani Prime Minister Imran Khan at the Oval Office.

Trump said Iran is disrespecting the United States and Washington is ready for the absolute worst scenario, but is also "ready for sense, too."

The US president called Iran a "very mixed up country," adding that "Iran does not know where they are."

With respect to statements that Iran arrested a network of CIA agents, Trump said it is a "totally a false story" and went on to accuse Tehran for supporting terrorism.

Earlier on Monday, the director of the Iranian Intelligence Ministry's counterespionage department said that Tehran uncovered a CIA network operating in Iran. The Tasnim news agency reported that the network was discovered on June 18 and some of the alleged spies have been sentenced to death while others received lengthy jail terms.

US Secretary of State Mike Pompeo in an interview with WFTV 9 in Florida said that Trump wants to talk with Iran but also wants to change Tehran’s "behaviour."

"The President has said that he’s happy to speak with the ayatollah, the leadership in Iran on the phone with no preconditions. The President firmly believes that talking and having these diplomatic exchanges to avoiding military conflict is the objective. But it doesn’t change the outcome we’re looking for," Pompeo said on Monday.

US-Iran relations have deteriorated since Trump unilaterally withdrew the United States from the Joint Comprehensive Plan of Action (JCPOA), also known as the Iran nuclear agreement, last spring. The United States proclaimed it intends to bring down Iran’s sale of oil to zero and re-introduced sanctions on almost all major sectors of the Iranian economy.