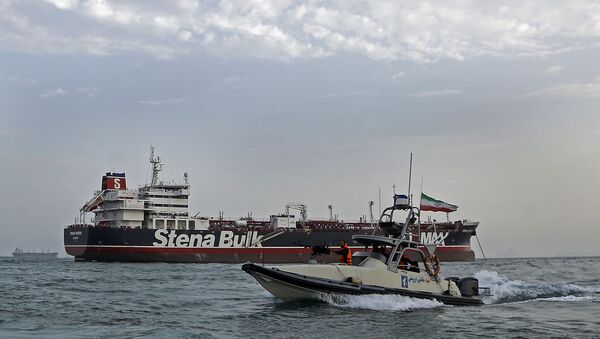 UK Foreign Secretary Jeremy Hunt has called for a European-led naval mission to ensure safe shipping through the Strait of Hormuz, adding that Iran should be ready for an increased Western military presence in the Persian Gulf following the detention of a British-flagged oil tanker.

Hunt spoke to parliament after a meeting of the UK government's emergency committee, discussing Britain's response to the seizure of the Stena Impero oil tanker by Iran in the Strait of Hormuz.

Edward Wastnidge, lecturer in politics & international studies at the Open University, has commented on the measures announced by the UK as tensions show no sign of abating.

Sputnik: What can you say about Jeremy Hunt’s speech?

Edward Wastnidge: Jeremy Hunt's speech was a predictable response from a government apparatus that is struggling with how to respond to the current tensions in the Persian Gulf. It's caught between its desire to maintain relations with Iran and stick to the JCPOA along with its European allies, but also the need to appease the US. Claiming that the Iranian seizure of the Stena Impero was an act of piracy is hypocritical given the UK's seizure of an Iranian vessel last week. We also need to take into consideration the current mess that is UK politics and how that is influencing things. Hunt wants to act in a statesmanlike manner to bolster his leadership ambitions or any likely position he might take under a Boris Johnson-led government.

Sputnik: The UK will establish this 'maritime protection mission' "as quickly as possible," the foreign secretary noted, and in the meantime would be taking other security measures to ensure its ships' safe passage through the Persian Gulf. How can this influence growing tensions in the region and the whole situation around the JCPOA? Will this lead to further escalation of the conflict?

Edward Wastnidge: The UK is trying to make this an international issue and garner support from other nations in bringing this so-called 'protection mission' together. The fact that it needs to do this shows that the UK is not in a position to defend its interests to the extent that it would like.

Further militarisation of the Persian Gulf is counter-productive, however, as it increases the chance of accidental confrontation. No doubt the hawks in Trump's foreign policy team are rubbing their hands with glee at this escalation with the UK because it draws London closer to DC in taking a hard line against Tehran, which is exactly what they want, given that the US' closest ally has tried to distance itself from America's violation of the nuclear deal.

Sputnik: How will increased military presence help in resolving the crisis?

Edward Wastnidge: I think that increasing the military presence in the region in no way helps the crisis. What might be seen as a deterrent by the UK and others is merely a provocation to Iran. All sides should be utilising diplomacy to reduce tensions.

Sputnik: How will the European allies react to these statements?

Edward Wastnidge: It's too early to say given how recent this statement is, but I expect other European nations to be less gung-ho than the UK on this issue. They may well offer some limited material and rhetorical support, but they have no interest in antagonising Iran and seeing this escalate further. For the EU, maintaining the JCPOA is vital, and they will most likely wait to see the nature of the new UK government, and whether this will signal any change in the UK's Iran policy, before making any significant commitments.