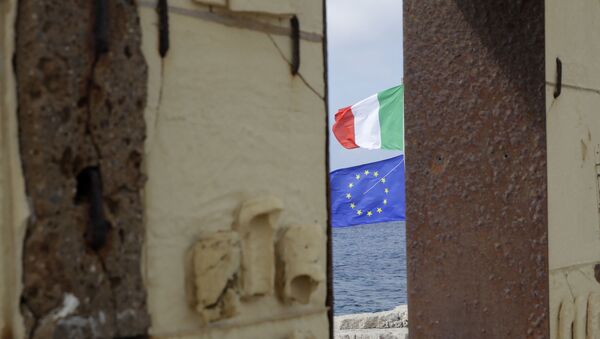 © AP Photo / Alessandra Tarantino
Subscribe
Libya, which descended into civil war in 2011 after militants supported by NATO warplanes overthrew the government, has been struggling to combat armed gangs and criminal groupings which have advantage of the chaos.

A Libyan motor launch boat has seized an Italian fishing trawler in the Gulf of Sirte, the Italian foreign ministry has said, Italy's ANSA wire service has reported.

Rome has instructed Italy's ambassador to Libya to "work promptly with the utmost efficacy to ensure the correct treatment and rapid release of the crew and the vessel...which has been forced to head for Misrata," the ministry said.

The cause of the seizure is being clarified, although the foreign ministry said it was "likely linked to fishing activities, in waters which are defined as high risk."

Control over Misrata is believed to be split between the Government of National Accord, the Italian and UN-recognised Libyan government, and local Islamist militias. Militants from the coastal city have recently engaged in battles with the Libyan National Army, another major force which has taken control of much of the country in recent years and which is waging a campaign against the GNA for control of Tripoli.

The Libyan civil war has caused extensive problems for its neighbours. On Monday, Tunisia reported that a Libyan ground attack aircraft had touched down in the country with a full complement of bombs onboard amid fighting for Tripoli.

Rome, which has faced the brunt of the refugee crisis affecting much of Europe over the last few years, has sought to stem the flow of people coming to Italy across the Mediterranean from Libya. Libya became a major hub for this flow after 2011, with criminal gangs taking advantage of an atmosphere of lawlessness in the country to ferry hundreds of thousands of people across the sea to Europe in exchange for hefty sums of money.

Once one of the wealthiest nations in Africa, Libya collapsed into chaos in 2011, after armed militants backed by NATO air power defeated forces loyal to Libyan leader Muammar Gaddafi and brutally executed him. The conflict turned the country into a failed state.