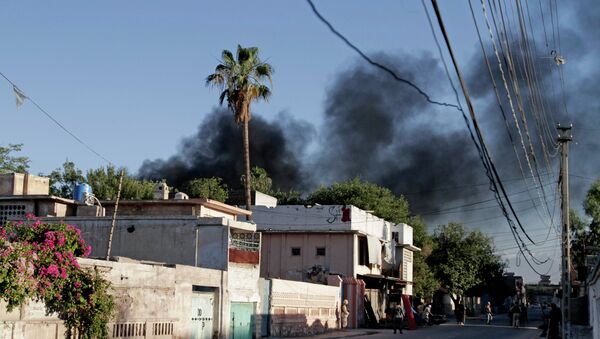 © AP Photo / Rahmat Gul
Subscribe
The day before, the US president said during a meeting with Pakistani Prime Minister Imran Khan that the US could wipe off Afghanistan in a week, but he didn't want to kill 10 million people.

The Afgan authorities said Tuesday that they would seek clarification from the US on Trump's words about "wiping out Afghanistan".

"Our nation's fate has often been determined by others ... this must end. We must determine peace and fighting for ourselves," Afghan National Security Council spokesman, Kabir Haqmal, told reporters.

The Afghan presidential office also released a statement in response to Trump's remarks, in which it reiterated Haqmal's position about Kabul's intention to self-determine its fate in domestic matters.

"Our cooperation and partnership with the world countries, particularly with the United States, is grounded on common interests and mutual respect. While the Afghan government supports the US efforts for ensuring peace in Afghanistan, the government underscores that foreign heads of state cannot determine Afghanistan’s fate in absence of the Afghan leadership," the Afghan presidential office said in a statement.

On Monday, Donald Trump held a meeting with Pakistani Prime Minister Imran Khan at the White House to discuss relations between the two countries that have deteriorated over the conflict in Afghanistan.

Washington has repeatedly stressed that it would suspend aid to Pakistan if the latter fails to fight those terrorists that have strongholds on the Pakistani soil.

Afghanistan is suffering from an unstable political, social and security situation due to the activity of the Taliban movement and Daesh* terrorist group. Pakistan shares a border with Kandahar, one of Afghanistan's most turbulent provinces that is densely populated with Taliban militants.

*Daesh [ISIL, the Islamic State, ISIS] - a terrorist group banned in Russia and many other countries