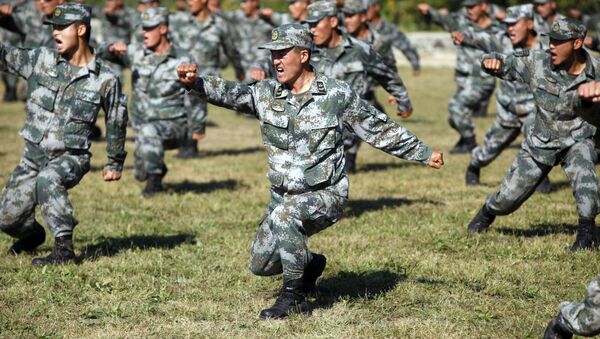 © AFP 2021
Subscribe
A day after the Beijing liaison office in Hong Kong was attacked and defaced by protesters, news broke that the People’s Liberation Army held drills in nearby Guangdong Province rehearsing its response to an urban uprising.

The PLA’s 74th Army Group announced on a now-deleted post on Weibo that the unit had “recently” held exercises near the city of Zhanjiang in southern Guangdong Province, the state that borders Hong Kong, Straits-Times reported.

Asia Times reported that roughly 1,500 soldiers practiced “swifty quelling large-scale unrest and restoring order in other contingencies such as terrorist attacks in a city and suburban environment,” using a purpose-built site complete with mock streets, schools and residential blocks. Some of the troops present also acted as the opposing force during the drill.

While it’s unclear when the drills were held, the news comes amid growing tensions in Hong Kong, a semi-autonomous city that rejoined the People’s Republic after having been a British colony for 160 years. The city was seized by the British as spoils of the 1838-40 Opium War as part of an attempt to force the Daoguang Emperor to open the Chinese Empire to Western trade, and returned to Beijing by treaty in 1997.

During the period of British rule, Hong Kong grew into a wealthy capitalist playground metropolis governed by British law and customs, and its reincorporation into the socialist state has been tumultuous and sensitive, following a “One Country, Two Systems” arrangement that will slowly phase the city into China by 2047.

When the Hong Kong government weighed amendments to a bill providing for extradition arrangements with the mainland, Hong Kong residents erupted in fury, launching mass protests in which marchers waved the British-era colonial flag and engaged in violent confrontations with police. While Hong Kong's Chief Executive Carrie Lam announced earlier this month that the bill was “dead,” the protests have continued, diffusing into a generalized anti-China sentiment.

On Monday, protesters attacked the Chinese government’s Liaison Office in Sai Ying Pun district, the central government’s main representative in the city, defacing it with eggs and black paint and damaging the building’s plaque bearing the national emblem.

"We absolutely cannot tolerate such embarrassment," Chinese Foreign Ministry spokesman Geng Shuang said Monday, noting that Beijing continues to support the Hong Kong government’s attempts to control the protests, enforce the law and punish criminals. Thousands of riot police have fought back against the rioters with rubber bullets and tear gas, among other tools.

While roughly 6,000 PLA soldiers are stationed in the city, Beijing has been reluctant to deploy them as of yet. Yue Gang, a retired PLA colonel-turned political commentator, remarked on Monday that PLA troops should be sent into Hong Kong if necessary.

“To deface the Chinese national emblem is like acting as an enemy to 1.3 billion Chinese people,” Yue said, AP reported. “They must be deterred.”

In contrast to Yue’s position, Hu Xijin, editor-in-chief of the Chinese Communist Party-owned Global Times, urged caution in a Weibo post Monday, noting that any such move would only further undermine the country’s image and cause the situation to deteriorate further.

“If the People’s Liberation Army helps to stabilize the situation, Hong Kong will benefit from law and order, but the public opinion won’t buy it,” Hu wrote. “The opposition camp would have every means to smear, resist and stir up trouble, and the West as a whole would launch a whole new round of criticism attacking Beijing for destroying its ‘One country, two systems’ pledges, meaning great uncertainty and political cost that would be too big to bear.”

000000
Popular comments
Many Chinese cities have already surpassed Hong Kong in terms of standard of living. It may take another generation or two to understand the wisdom of the One Country policy.

arcsmith
23 July 2019, 23:43 GMT1
000000
If I am mainland Chinese, I would just let them riot. Eventually the majority of Hong Kong citizens who wants no part of these riots will lose their bread and butter and fight these rioters. When jobs and business goes, then only will people realise forever who destroyed their future. Tourist won't stop by Hong Kong. Hong Kong factories cannot compete with mainland. Hong Kongers are stupid not knowing they are already on the path downward. Just like UK & US. Imported western pride will be slapping back hard.
hwy
24 July 2019, 00:02 GMT2
000000
Newsfeed
0
New firstOld first
loader
LIVE
Заголовок открываемого материала
Access to the chat has been blocked for violating the rules . You will be able to participate again through:∞. If you do not agree with the blocking, please use the feedback form
The discussion is closed. You can participate in the discussion within 24 hours after the publication of the article.
To participate in the discussion
log in or register
loader
Chats
Заголовок открываемого материала
Worldwide
InternationalEnglishEnglishMundoEspañolSpanish
Europe
DeutschlandDeutschGermanFranceFrançaisFrenchΕλλάδαΕλληνικάGreekItaliaItalianoItalianČeská republikaČeštinaCzechPolskaPolskiPolishСрбиjаСрпскиSerbianLatvijaLatviešuLatvianLietuvaLietuviųLithuanianMoldovaMoldoveneascăMoldavianБеларусьБеларускiBelarusian
Transcaucasia
ԱրմենիաՀայերենArmenianАҧсныАҧсышәалаAbkhazХуссар ИрыстонИронауОssetianსაქართველოქართულიGeorgianAzərbaycanАzərbaycancaAzerbaijani
Middle East
Sputnik عربيArabicArabicTürkiyeTürkçeTurkishSputnik ایرانPersianPersianSputnik افغانستانDariDari
Central Asia
ҚазақстанҚазақ тіліKazakhКыргызстанКыргызчаKyrgyzOʻzbekistonЎзбекчаUzbekТоҷикистонТоҷикӣTajik
East & Southeast Asia
Việt NamTiếng ViệtVietnamese日本日本語Japanese中国中文Chinese
South America
BrasilPortuguêsPortuguese
NewsfeedBreaking
05:10 GMTAs Indian Health Survey Suggests Women Outnumber Men Expert Claims 'This Isn't the Real Number'
04:50 GMTP&G Recalls Over a Dozen Old Spice, Secret Sprays After Detection of Cancer-Causing Chemical
03:47 GMTAlabama AG Threatens to Sue City Officials for Removing Confederate President's Name From Avenue
03:39 GMTOver 100 People Arrested in Solomon Islands After Riots in Honiara, Police Say
03:39 GMTMigrant Caravans in Mexico Head North After Slow Visa Processing by Authorities - Reports
03:34 GMTOutgoing UK Chief of Defense Staff Describes Russia as Most Acute Threat
02:59 GMTRussia, China Slam Idea of Summit For Democracy As It Contradicts Development of Modern World
02:30 GMTBoebert vs. 'Jihad Squad': GOP Rep. Buries the Hatchet With Squad's Omar Over Feud Caused by Remarks
01:53 GMT'As if Disney Were Entering Notre-Dame': Critics Blast Cathedral's 'Woke' Rebuilding Plan - Report
01:42 GMTMan Killed After Trying to Crash Gate of San Diego Military Base With Knife
01:07 GMTNew York Governor Declares State of Emergency Amid Spike in COVID-19 Infections
YesterdayPfizer Unsure if Omicron Evades Its Vaccine, Can Launch New One in 100 Days
YesterdayMusk Rails Against State Aid as Tesla Pulls Application for $1.28 Bln in Subsidies for Berlin Plant
YesterdayBiden Says Not Concerned About US Stock Market Plunge as He 'Expected It'
YesterdayMalawi Defends Inviting Mike Tyson to Be Cannabis Ambassador - Report
YesterdayFDA Deems Merck Pill Effective Against COVID-19 as Experts Plan to Review Safety
YesterdayThose Darned Crickets! FBI Makes Mystery 'Havana Syndrome' its Top Priority
YesterdayVideos: Shooting Prompts Lockdown at North Carolina Mall
YesterdayTrump Claims He Never Planned to Start War With China, Says Milley Should Be Tried for 'Treason'
YesterdayTrade Unionists Slam Labour London Mayor Khan Over ‘Unnecessary Strike’ Tweet