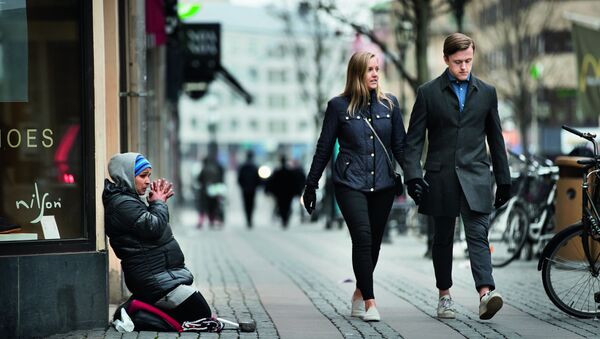 In recent years, the Nordic nation has seen an upward trend in robberies, with 2018 becoming a new peak.

Last week, an 18-year-old man was robbed and murdered in Gothenburg. The perpetrators stabbed the young man and took his cellphone and necklace. Since the case triggered strong reactions and a passionate debate, TV4 offered tips to other Swedes on how to protect themselves from getting mugged.

Sven-Erik Alhem, the chairman of the Victim Support group, suggested “dressing poorly” and looking “like you don't own anything”.

“It may sound strange to behave in this way, but looking poor can really reduce the risk of violent crime in the form of robbery”, Alhem explained.

Alhem also stressed that muggers often bear knives, which are “easy to apply”. The expert likened robbers to predators in looking for the weakest animals. According to him, a young person is much more likely to get mugged than a “Rambo character” adult. He also stressed that being mugged can result in life-long trauma.

However, this advice wasn't well received by many Swedes.

Journalist and columnist Chang Frick posted a sarcastic “expert's guide” on how to perfect the “hobo look” for one's personal safety. Frick suggested a systematic approach that included “skipping the hairdresser”, “growing a tousled beard”, “wearing generic stain-covered clothes with no brand name”, “cheap and worn shoes”, “wearing oddities like a knitted hat all year round”.

According to Frick, “dressing down” should be accompanied by using older smartphone models, preferably with a broken display and avoiding jewellery of all sorts.

Furthermore, since “simply having a bag” is a risk factor as a mugger may suspect in contains anything of value, Frick suggested putting your stuff in a plastic bag from your nearest grocery store.

“Last but not least, your bearing is important. Go around with a hunched back, wandering gaze and act a little breathless”, Frick concluded his tips.

“The nice thing about everyone dressing up as a tramp is that we are one step closer to the classless society. This, in fact, a progressive act”, Frick scoffed on Twitter.

​Following his advice, many Swedes started posting their "hobo looks".

​Tweet: “When you have coffee abstinence and have to get through the 'hood to buy some. What do you think, do I blend in enough to avoid being robbed now?

​Tweet: This is how you do it the Balkan way.

“For a women, an unkempt beard wouldn't work, but tousled hair and unshaven armpits are a definite advantage, who the hell mugs a feminist?” a user quipped.

​“And women can dress up in Burka to reduce the risk of group rape. Completely in line with Socialist politruks' vision”, another one scoffed.

​Others recalled the recent incident when SVT aired tips for children how to act when being mugged, which sparked similar outrage.

According to SVT, the number of reported robberies of people under the age of 18 is on the increase. 2018 was a peak year, and preliminary figures for the first quarter of 2019 cite 257 reported cases involving children under 15 - a new record.