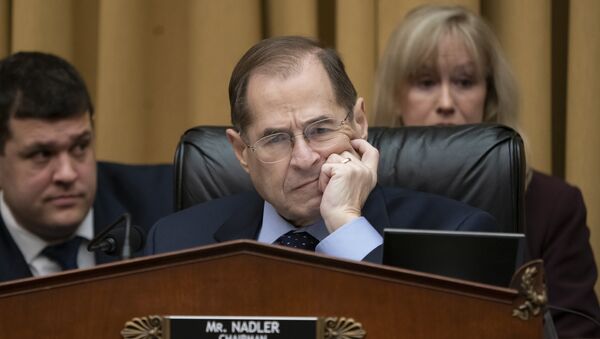 The House Judiciary head on Wednesday will lead hearings in which US Special Counsel Robert Mueller is expected to testify on possible obstruction of justice charges against US President Donald Trump allegedly conducted during the counsel’s probe into alleged Russian meddling in the 2016 US elections.

US House Judiciary Committee Chairman Jerrold Nadler has privately voiced support for the impeachment of the president, according to Nadler aides, cited by The Washington Post.

Nadler previously said that the Mueller report presents “very substantial evidence that the president is guilty of high crimes and misdemeanors.”

“We have to let Mueller present those facts to the American people and then see where we go from there, because the administration must be held accountable and no president can be above the law,” he said on Fox News Sunday.

Nadler stopped short of publicly calling for an impeachment, according to The Hill.

The Intelligence Committee’s Adam Schiff last week called Trump “an essentially unindicted co-conspirator” and speculated that the president would be prosecuted after leaving the White House.

“I assume that […] the [Michael Cohen] case will be reopened when he leaves office, providing the statute of limitations has not run, and the Justice Department will have to weigh whether to indict the former president,” he said about the probe into Trump’s former personal attorney by attorneys for the Southern District of New York.

Last week, the House held a vote on impeachment, but the measure was effectively killed. During the vote, Schiff voted with most Democrats to ditch the move, while Nadler was among 95 Dems who voted to keep the measure alive, the Post report says.