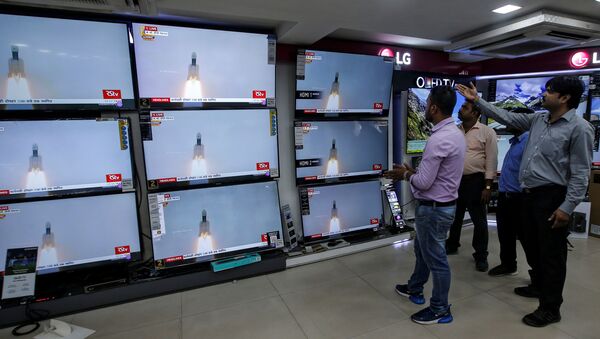 New Delhi (Sputnik): India has launched its second Moon Mission, Chandrayaan-2 into lunar orbit successfully. The spacecraft, initially slated to be launched on 15 July, had to be abandoned 53 minutes before take-off due to a “technical snag” in the engine's cooling system.

The spacecraft was launched on Monday from India’s lone spaceport at Sriharikota on the country's east coast in Andhra Pradesh at 14:43 local time. The most complex space mission India has ever undertaken will be operational for one year.

Chandrayaan-2 will head to the Moon’s South Polar Region, inaugurating India into the select club of nations to complete a landing on the lunar surface, which currently includes: the US, Russia and China. It will be the first space mission to attempt to soft-land the lander –Vikram and rover Pragyan in a high plain between two craters at a latitude of about 70 degrees south.

Chandrayaan-2 consists of an orbiter, lander and rover; if everything goes according to plan, it will land on the moon following a meticulously planned series of manoeuvres on the 48th day, i.e., 7 September 2019, after covering a distance of about 384,000 km. It is carrying 14 separate equipment packages, which will carry out experiments.

Indians have taken to Twitter to express their joy over the successful launch of the lunar mission.

Congratulations #ISRO and all our scientists who have put in their hard work! #Chandrayaan2 🙏we are poud of you 👍Historical achievement for India 🇮🇳🇮🇳🇮🇳🇮🇳 pic.twitter.com/Fjy7uGyS3t

The 3,850 kg spacecraft was fired using a massive rocket, the GSLV Mark III; the launch will consist of two stages and be followed by a sub-orbital flight.  The rocket is India’s most powerful launch vehicle to date and was designed and fabricated completely within India.

“Through this effort, the aim is to improve our understanding of the Moon- discoveries that will benefit India and humanity as a whole. The insights and experiences aim at a paradigm shift in how lunar expeditions are approached for years to come – propelling further voyages into the farthest frontiers,” said India’s space agency, Indian Space Research Organisation, ISRO.

The lunar South Pole is especially interesting because much of the area there remains perpetually in shadow, and the total area of such regions is much larger than at the lunar North Pole. There is a possibility of the presence of water within the ‘cold traps’ of the dark craters, which could also contain a fossil record of the early Solar System. The first Lunar Mission had identified the possibility of trace amounts of water on the Moon.

​India’s first successful lunar mission took place in 2008; it made history by making more 3,400 orbits around the moon. It carried 11 scientific instruments built in India, the US, UK, Germany, Sweden and Bulgaria.

The cost of Chandrayaan2 is the cheapest among Moon Missions. Its total cost is $ 142 million, which is less than half the cost of the recently-released Hollywood movie Avengers: Endgame.