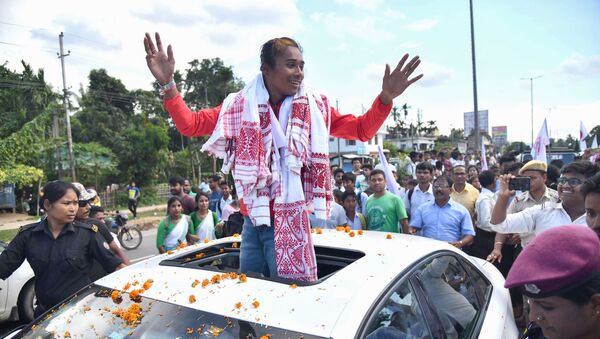 New Delhi (Sputnik): Social media is abuzz with praise for the new Indian sports sensation Hima Das, who has amazed the country by winning her fifth Gold medal within a month at various international athletic events in Europe.

With the Indian President and Prime Minster leading the nation, celebrities and sports lovers followed their example and showered praise on the young girl from the State of Assam.

India is very proud of @HimaDas8’s phenomenal achievements over the last few days. Everyone is absolutely delighted that she has brought home five medals in various tournaments. Congratulations to her and best wishes for her future endeavours.

​India’s legendary superstar Amitabh Bachchan described her as the “Pride of India” while other celebs called her ‘The Golden Girl’. Many film personalities took part in hailing the gold medalist.

Congratulations on winning the 5th gold @HimaDas8! Your act of kindness towards Assam is an inspiration to us all. A great athlete with a heart of gold. Wishing you all the more success! India is proud of you! https://t.co/Q06SBAKUhq

India’s cricket legend Sachin Tendulkar, who was recently inducted into the ICC Hall of Fame, and other cricketers joined the league in congratulating Hima Das.

Loving the way you have been running in the European circuit over the last 19 days.
Your hunger to win and perseverance is an inspiration for the youth.
Congrats on your 5 🥇 Medals!
All the best for the future races, @HimaDas8. pic.twitter.com/kaVdsB1AjZ

5 golds in 19 days and I am sure 5 of the many more to come. What a Champion is @HimaDas8 . Making India Proud! pic.twitter.com/H6kncAY6bh

Hima Das, who felt honoured by the outpouring of wishes, said she would continue to work hard to bring laurels for the country.

Thank you @narendramodi sir for your kind wishes. I will continue to work hard and bring more medals for our country. https://t.co/wR8uXR1CL0

The Golden Girl's Journey at the July International Athletic Games

The gold rush began for Das on 2 July at the Poznan Athletics Grand Prix in Poland.

The second victory came in women's 200m at the Kutno Athletics Meet in Poland on 7 July.

The third gold medal was at the Kladno Memorial Athletics Meet in the Czech Republic on 13 July.

Das clinched her fourth gold at the 200m race at the Tabor Athletics Meet in the Czech Republic on 17 July.

She bagged her fifth gold medal at the 400-metre competition with a clock time of 52.09 seconds at the Nove Mesto Grand Prix in the Czech Republic on 20 July.

Her fifth medal came with a better time than her previous performance, in which she clocked 52.88 seconds but slower than her personal best that she managed at the 2018 Asian Games with a clock time of 50.79 seconds in a 400m race.

.@HimaDas8 You are India's fastest #BulletTrain. We are proud of you.