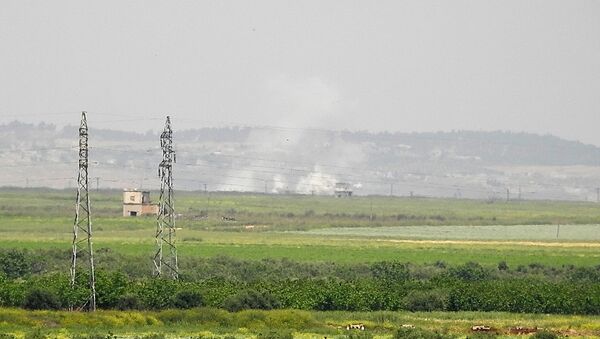 © Sputnik / Bassel Shartooh
Subscribe
Earlier in July, the Syrian army reportedly launched bombardment of several Nusra Front positions in Hama and Idlib provinces in retaliation for attacks on Hama villages. A number of terrorists' positions and rocket launch pads were reportedly destroyed in the operation.

Syrian air defences on Sunday repelled the hostile attack in the northwestern city of Masyaf in Hama province, Reuters reported, citing local media. There have been reportedly no further details available.

The terrorists have reportedly increased the frequency of shelling of the Syrian provinces of Hama, Aleppo, and Latakia. They were also attempting to attack Syrian army positions in the region. The government forces have responded by attacking terrorists in Idlib.

Most of Idlib is reportedly controlled by Hayat Tahrir al-Sham, an alliance of Islamic terror groups led by al-Qaeda-linked Nusra Front. There are reportedly 30,000 militants, including foreign mercenaries, in the region.

Earlier on Sunday, the Syrian army reportedly repelled an attack by the Nusra Front terrorists on its positions in the Qasabiyeh village in Idlib's southern countryside, recently retaken by the government forces. Terrorists used suicide bombers and several armored vehicles to carry out the attack but were repelled by the Syrian army units, the SANA news agency stated.

The military killed several terrorists and destroyed their equipment, the media outlet added.

The Syrian conflict has been ongoing since 2011. Russia, Turkey, and Iran are guarantor states of the Syrian ceasefire. Russia carries out humanitarian operations across the country on a regular basis and helps Damascus guarantee the safe return of Syrian refugees to their homes.

*Hayat Tahrir al-Sham, Nusra Front are terrorist groups banned in Russia and many other countries.

000000
Popular comments
Israeli warplanes have conducted an airstrikes on Shia militias in Iraq, the first time striking Iraq in almost 40 years but Sputnik ignored the breaking news. Before the strike there was demonization of the Shia militias by the CIA and it was exposed the CIA was collecting information for a potential airstrike. In 2018 Israel airstriked Shia militias in Syria's Deir Ezzor near Iraq's border.

FeEisi
22 July 2019, 04:01 GMT
000000
The foreign backed extremist elements are gradually being concentrated and reduced in key parts of Syria. Soon the nation will be whole again and peace will return to all Syrians.