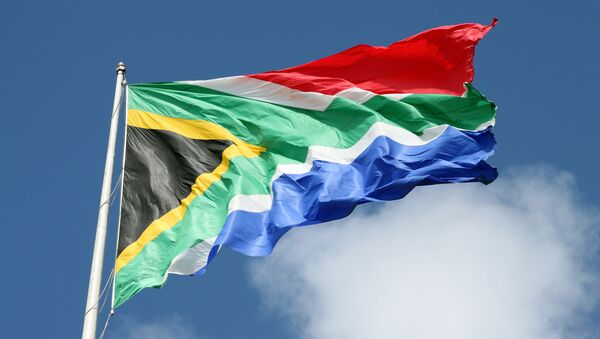 CC BY 2.0 / Flowcomm / South African flag
Subscribe
South Africa's central bank is implementing limited monetary stimulus to prevent a possible recession amid a broad-based drop in consumer demand, as well as the manufacturing, mining and utilities sectors of the Rainbow nation's economy.

Kristian Rouz – The South African Reserve Bank (SARB)  is cutting its main interest rate by 0.25 percent, and is implementing broader stimulus in an attempt to reinvigorate the nation's faltering economic growth. The move comes as the Rainbow nation is facing infrastructure disruptions, high unemployment, and an ongoing decline in the purchasing power of its households.

The SARB's Monetary Policy Committee (MPC) voted unanimously to cut its repurchase rate to 6.5 percent on Thursday. The repo rate is the SARB's main lending facility for commercial banks, and the cut is aimed at supporting the banks' issuance of loans to corporate and individual clients.

The rate cut is the first move to loosen monetary conditions in South Africa since March 2018.

​The central bank also revised its GDP growth outlook for this year down to 0.6 percent from the 1 percent expected previously.

Officials say the Rainbow nation is facing a combination of domestic and external pressures, and a looser monetary environment could support business activity at home and partially offset the negative effects of trade disruptions, credit rating downgrades, and a capital flight from the once-prosperous country amid ongoing talk of a racially-biased agricultural land seizure initiative.

The central bankers also said South Africa's inflation remains stable at 4.5 percent as of this past May.

“The MPC welcomes the continued downward trend in recent inflation outcomes and the moderation in inflation expectations of about one percentage point since 2016,” Lesetja Kganyago, Governor of the SARB, said.

​The rate cut is expected to absorb some of the macroeconomic risks facing South Africa. However, economists say the Rainbow nation has entered a period of turbulence, as its state-owned corporations, key infrastructure objects, and the labour market have shown little or no improvement over the past 25 years since the end of apartheid.

Reports suggest the majority of South Africans find it harder to pay their bills amid the ongoing hikes in utility costs, including with respect to water and electricity. Meanwhile, the government's recent decision to raise the value-added tax (VAT) from 14 to 15 percent, and the rising cost of petrol and other fuels add to the concerns regarding broader consumer spending.

Meanwhile, the Rainbow nation's Bureau of Economic Research (BER) has found that South Africa's consumer confidence declined in the first quarter of this year, posting a modest recovery in 2Q19.

In this light, most South Africans have restrained their spending amid expectations of possible hard times ahead. Many households have also reduced their exposure to debt. The latter is particularly relevant to the latest rate cut, as more affordable credit might not help spur consumption if consumers don't apply for new loans.

GDP contracted by 3.2% in the first quarter, reflecting weakness in most sectors of the economy. The sharp quarterly decline was primarily caused by electricity shortages and strikes that fed into broader weaknesses in investment, household consumption and employment growth. pic.twitter.com/a67D1d6kcr

However, central bankers believe a combination of fiscal policies conducted by the Treasury and the monetary policies of the central bank would give a better effect on ensuring better macroeconomic performance.

While the debate continues, South Africa's economy could be in a new recession – after falling a dramatic 3.2 percent in 1Q19, and a brief technical contraction in mid-2018.