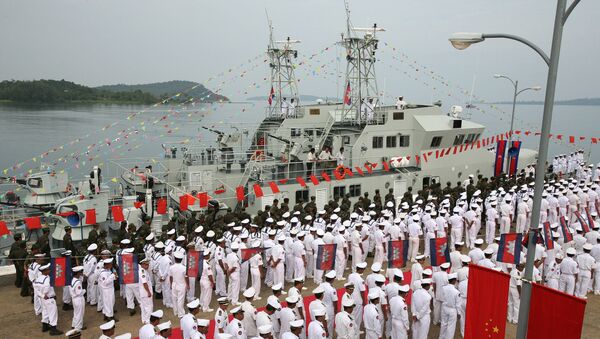 © AFP 2021 / TANG CHHIN SOTHY
Subscribe
Earlier in the day, The Wall Street Journal reported that Cambodia had signed a deal with China to provide Beijing with a naval base. Both Phnom Penh and Beijing have repeatedly denied the existence of an agreement to build a joint cooperative military base.

Cambodian Prime Minister Hun Sen denied the report, saying that "This is the worst-ever made up news against Cambodia," according to the pro-government news site Fresh News.

"No such thing could happen because hosting foreign military bases is against the Cambodian constitution," he said.

Chhum Socheat, Cambodian defence ministry spokesman, argued that the report was "made up and baseless," according to Reuters.

According to the report, US officials received an early draft of the deal, reportedly signed this spring, which says that Cambodia will grant China access to an naval base located in Ream in the Gulf of Thailand (Gulf of Siam) for 30 years, with automatic renewal every 10 years.

However, both Beijing and Phnom Penh have repeatedly denied that the deal has taken place, with a Cambodia government spokesperson dismissing the report as “fake news.”

“Nothing is happening like that,” he told The Wall Street Journal.

Earlier in January, the Cambodian prime minister called a rumour of the deal “fake news,” adding that Cambodia’s Constitution “does not allow any country to set up military bases” in the nation.

At the time, the US Department of Defence sent a letter to Cambodian Defence Minister Tea Banh inquiring why Phnom Penh had declined an offer to repair the Ream Naval Base.

The DoD spokesman commented on the issue in January saying that “perhaps, there will be some changes in the future,” without providing details.

US officials are now discussing how they can influence  persuade Phnom Penh to reverse the alleged decision, as the base would allow China to post military personnel, store weapons and berth warships much closer to sensitive areas, The Wall Street Journal report says.

The US and its allies have tried to dissuade Cambodia from allowing a Chinese company to build the Dara Sakor International Airport, set to open in 2020, The Hill report says. The airport, built with a 99-year lease, has 2-mile long runways which The Hill says will fit for Chinese heavy transport military aircraft.

Relations between Cambodia and the United States hit a low point in August 2017 after Phnom Penh accused Washington of interfering in the country’s domestic affairs. In January, Cambodian media speculated that a Chinese naval base on Cambodian shores would give Beijing access to a new flank in the contested South China Sea region, where China is engaged in a continuing row with the US over freedom of navigation issues.

000000
Popular comments
A ridiculous degree of interference from the americans. Cambodia is a nation bordering China that will no doubt be an integral part of the One Belt One Road initiative. The Cambodian Prime Minister Hun Sen has decided on a future of peace and prosperity rather than the eventual militarization that western interests would prefer.