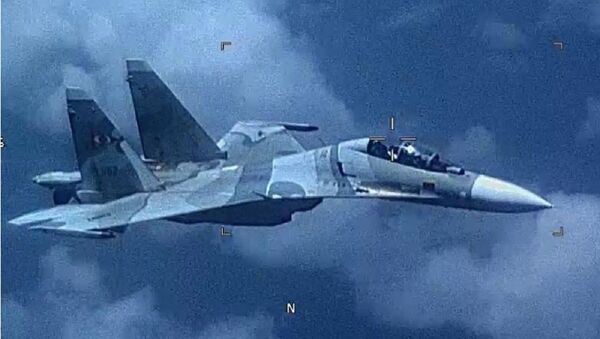 CC0 / /
Subscribe
On Friday, the Venezuelan Armed Forces reported scrambling a fighter jet to intercept a US EP-3 reconnaissance plane flying in Venezuelan airspace over the Caribbean Sea, saying that the fighter had established visual contact with the spy plane and escorted it until it left the region.

US Southern Command has released footage of a Venezuelan Air Force SU-30 fighter jet it claimed “aggressively shadowed” a US EP-3 spy plane on July 19, accusing the fighter of “jeopardizing the crew and aircraft” over “international airspace.”

The video shows the jet flying alongside the US plane. The planes did not make contact, and no injuries were reported in the incident.

In a second tweet, SouthCom claimed that Friday’s incident demonstrated “Russia’s irresponsible military support to [Nicolas] Maduro’s illegitimate regime and underscores Maduro’s recklessness and irresponsible behavior, which undermines international rule of law and efforts to counter illicit trafficking.” The tweet did not specify what kind of "trafficking" SouthCom was referring to.

On Friday, Venezuela’s Defence Ministry accused the US plane of violating the Latin American country’s airspace, and said the incident was not the first time a US aircraft has attempted to do so. According to the Defence Ministry, US military aircraft have tried to violate Venezuelan airspace over 70 times since the start of the year.

The Venezuelan military released its own video from Friday’s incident, including footage taken from the cockpit of the Venezuelan SU-30 shadowing the spy plane, as well as an animated map showing the alleged flight path of the errant EP-3 as it flew into Venezuela’s airspace before being expelled.

Tweet reads: "The Aerospace and Integral Defence Command has intercepted a US EP-3E intelligence and radio scanning aircraft spotted in the Maiquetia flight information region, violating international air treaties in a blatant provocation against the Bolivarian Republic of Venezuela."

Last week, a State Department spokesperson told US media that Washington was considering diverting funds designated for other Latin American countries to beef up support for Juan Guaido, the Venezuelan opposition figure who proclaimed himself ‘interim president’ back in January.

Venezuela’s long-running political and economic crisis was exacerbated by Guaido’s power grab attempt, and the opposition figure has received major diplomatic and economic support from the US and its European and Latin American allies. The crisis resulted in the imposition of hard-hitting US sanctions on Venezuela, and to the freezing of billions of dollars’ in Venezuelan assets abroad, with some of these funds reportedly redirected to Guaido and his associates.

Venezuelan President Nicolas Maduro has called Guaido a US puppet, and accused Washington of trying to orchestrate a coup in his country aimed at securing US access to Venezuela’s vast oil riches.

Russia, China, and dozens of countries around the world refused to recognize Guaido, and have demanded that outside powers including the US refrain from meddling in Venezuela’s internal affairs. On Sunday, Russian Deputy Foreign Minister Sergei Ryabkov said that although Russian military experts have completed their mission in Venezuela, they will return if necessary.