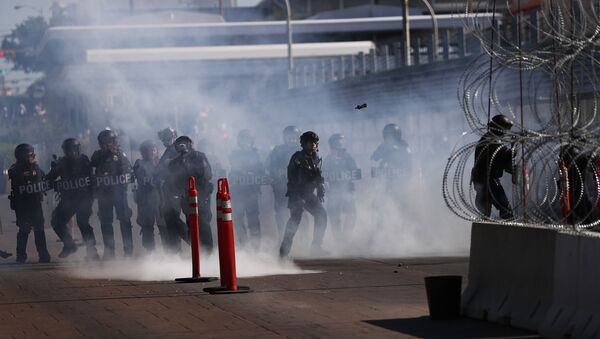 The new rule, which went into effect earlier this week, is meant to limit the influx of asylum-seeking migrants arriving on the US border.

Meanwhile, US Customs and Border Protection (CBP) agents dispersed a group of some 50 migrants early on Saturday, who were attempting to illegally enter the United States at a port of entry along the US-Mexico border in Texas, Fox News reported.

According to a CBP official cited by Fox News, the immigrants three times attempted to cross the Pharr-Reynosa International Bridge after it had been closed.

"Ignoring commands to stop, the group suddenly rushed the temporary barricades, bent metal poles and disabled the concertina wire affixed to the barrier [...] Several males in the group disregarded commands to stop and physically pushed through the barriers [...] When confronted by CBP officers, the combative individuals began assaulting the officers by punching, kicking, and attempting to grab the officers’ protective devices”, the CBP official said, cited by Fox News.

According to the report, two migrants were charged with interference and federal charges are pending against 14 others who were apprehended. Mexican authorities reportedly removed the remaining individuals from the bridge.

Similar incidents have become reportedly increasingly common now that caravans of migrants from Central American countries seeking asylum began moving toward the United States through Mexico last fall. US President Donald Trump called the surge of arrivals a 'crisis' and declared a national emergency in February in an unsuccessful attempt to to secure funds for constructing a border wall.

Trump signed a bill last month to provide $4.6 billion in humanitarian assistance on the US southwestern border as federal agencies struggle to cope with the influx of migrants.

Trump said in June that the United States and Mexico had reached a deal under which Washington would abandon earlier plans to impose tariffs on Mexican goods in a bid to stop the migrant influx. The deal stipulates that Mexico will deploy its National Guard to its southern border and will work to dismantle human smuggling networks.

According to some US-based media, over one million migrants from the Central and South America are expected to cross the US border as illegal aliens this year.