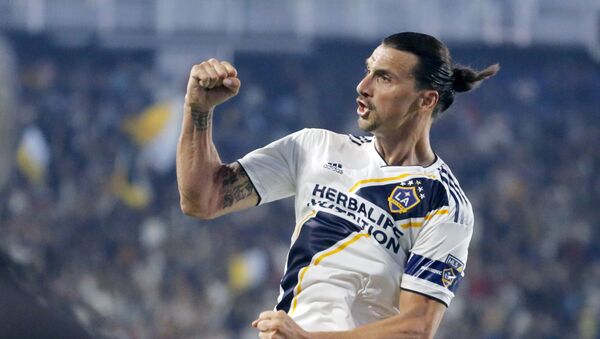 Zlatan Ibrahimovic is famously known for trash-talking off the pitch, but a recent altercation saw him tongue-lash a member of the rival team during the game.

LA Galaxy star Zlatan Ibrahimovic stole the show on Friday night as his club hosted LAFC in yet another battle for Los Angeles supremacy.

Zlatan delivered a hat-trick in 70 minutes, leading his club to an impressive 3-2 victory.

But the derby, known as El Trafico (a play on Spain’s “El Clasico” and Los Angeles’ notorious traffic congestion) was marred by a post-match verbal spat between the two camps.

One of the LAFC coaches didn’t know where to go, so Zlatan tried to tell him pic.twitter.com/LfwC9IQXhD

Friday’s game was preceded by Ibrahimovic’s mockery of LAFC star Carlos Vela, who tops the goal-scoring chart and is claimed by some MLS fans to be the best player in the league this season.

But the 37-year-old Swede said he was “by far” better than Vela, who is playing in MLS “in his prime” (the Mexican is now 30), while Zlatan played for European grands when he was Vela's age.

“MLS is not the level of Europe, to be honest. Before, I played with players either on my level or close to it which makes the game connect easier. Here, I am like a Ferrari among Fiats. And it can happen that the Ferrari can become the Fiat, or the Fiat can become the Ferrari. I had the same issue with the national [Swedish] team, though not as much,” he bragged.

Ahead of El Tráfico, Zlatan says he's the best player in MLS "by far" 👀 (via @ahoraonuncaespn) pic.twitter.com/nAqYrM47sB

The former Manchester United, PSG, Barcelona and Juventus star joined Galaxy in 2018 on a free transfer and has since had 35 goals and 10 assists in 43 appearances for the club.