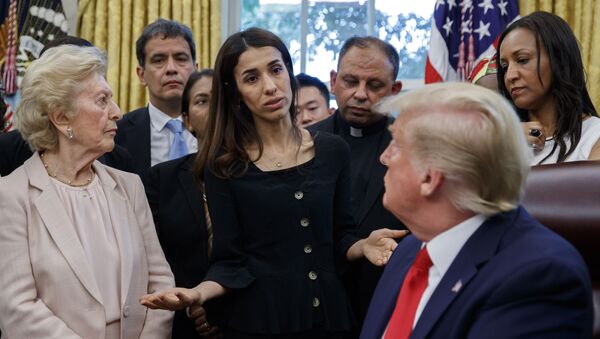 Nadia Murad received her Nobel Peace Prize in 2018 for speaking out against abuse and sexual violence, after enduring sex slavery at the hands of Daesh terrorists in Iraq.

A recent meeting between US President Donald Trump and Nadia Murad, a Yazidi woman and Daesh* sex slavery survivor from Iraq who won the Nobel Peace Prize last year, suddenly turned awkward when the president inquired about the current whereabouts of Murad’s relatives, right after she informed him of their tragic demise.

"Where are they now?" Trump interjected when Murad said that Daesh terrorists "killed my mom, my six brothers", prompting her to pause and then clarify that "they are in the mass graves in Sinjar".

During the exchange, Trump also asked Murad "for what reason" she received her Nobel Peace Prize.

News of this development quickly sent ripples across social media, with many users looking appalled by the president’s reaction.

When someone tells you they killed her mother and 6 brothers is the typical follow up “where are they now?”

So clear that A) Trump has no idea what she's talking about B) is bored to tears and annoyed that she is asking him to take action C) could care less about the plight of these people.

“They killed my mum and my brothers...”
“Where are they now?” trump asks.
“They killed them.”

This poor woman has no idea that she’s pouring out her heart to him and he’s not hearing a single word she’s saying.

It comes from not reading briefs prepared by your staff FOR THE MEETING , BEFORE the meeting

A number of people even went on to claim that Trump seemed jealous of Murad’s Nobel Peace Prize.

Trump is jealous about the Nobel Prize. He only cares about himself . #ImpeachTheMF

All he cares about is her Nobel prize and that's ALL he heard, he was bored until he talked about that. And, by the way, most men would have had the decency to stand up while she was talking.

Some, however, appeared to reserve their criticism for Murad instead.

Those who are ridiculing Trump have missed a fundamental point. Frankly, Nadia Murad is still only 26, got released from ISIS only 3 years back & doesn't have years of social service behind her, to deserve the Nobel Peace Prize, of all prizes. This wasn't merit oriented.

Murad was awarded the Nobel Peace Prize in 2018 along with Denis Mukwege, a gynecologist treating victims of sexual violence in the Democratic Republic of Congo, for their "efforts to end the use of sexual violence as a weapon of war and armed conflict".

*Daesh (also known as ISIS/ISIL) is a terrorist organization outlawed in Russia.