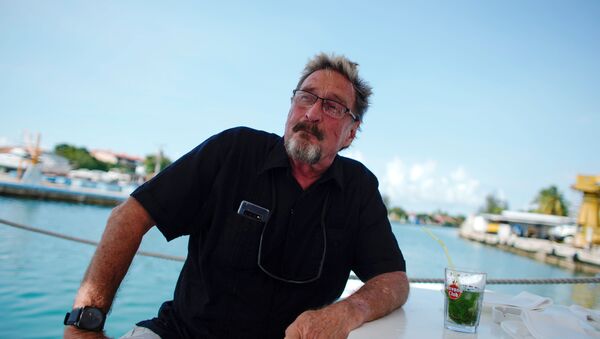 © REUTERS / Alexandre Meneghini
Subscribe
A fugitive for tax evasion, McAfee is currently travelling through the Caribbean together with his wife. The Libertarian Party’s 2020 presidential hopeful claims the authorities want him on unconfirmed charges of murder and money laundering, which he denies.

Cybersecurity tycoon John McAfee has claimed that the CIA has attempted to “collect” him and his wife, who are currently hiding somewhere in the Caribbean over unpaid taxes.

McAfee, 73, posted an image of himself and his wife Janice Dyson from aboard their fishing yacht. McAfee is holding a semi-automatic rifle, while his better half is seen wielding a shotgun.

“The CIA has attempted to collect us. We are at sea now and will report more soon,” he wrote, adding that he would disappear from social media radars for a while.

The CIA has attempted to collect us. We are at sea now and will report more soon. I will continue to be dark for the next few days. pic.twitter.com/o79zsbxISl

The eccentric millionaire, who is running for president in 2020, fled US shores in January. He says that the Internal Revenue Service – the US government agency responsible for the collection of taxes – wants him, his wife and four of his colleagues over “unspecified crimes of a felonious nature”.

A blatant example of U.S. Government lies about me. Sputnik news asked the IRS about my claims that they wanted me. They denied it. Below are screenshots of the Sputnik article and images of their Grand Jury documents asking for indictment. Wake up America! pic.twitter.com/hGVkgm4lXJ

McAfee alleged last month, citing sources in the State Department, that the authorities are in the midst of charging him with murder, money laundering and racketeering. US officials have not commented on the claims so far.

One of the founding fathers of the anti-virus software industry has not filed tax returns in eight years, in his own words, and he insists this is his only wrongdoing (he also insists that taxation is illegal).

He describes himself as the victim of “political persecution”, and threated to “f***ing bury” the government by publishing incriminating information if it goes after him.

I Am a presidential candidate with 1.2 mil  followers. My crime is not filing tax returns - not a crime. The rest is propaganda by the U.S. government to silence me. My voice is the voice of dissent. If I am silenced, dissent itself will be next.