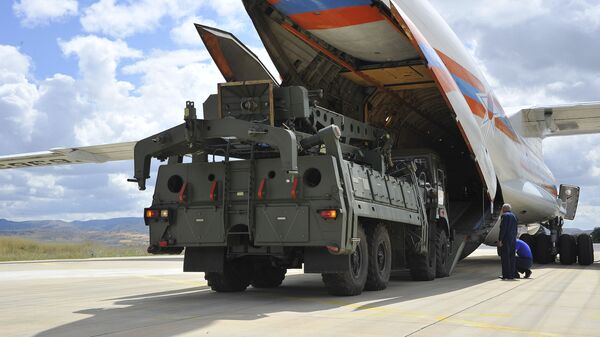 Demond Cureton
All materialsWrite to the author
The news comes after the US Department of Defence (DoD) said on Wednesday it was in the process of “unwinding” Turkey from its F35 Joint Strike Fighter programme after the latter chose to buy Russia’s S-400 surface-to-air missile defence systems.

Turkey had accepted deliveries of Russian S-400s and would not be allowed to have them alongside the US’s F-35 Lightning II fighter jets, Deputy undersecretary of defence for Policy David Trachtenberg said in tweets published by the DoD on Thursday.

But while the developments were 'unfortunate', US officials would maintain ties with Ankara as a key NATO ally, Mr Trachtenberg said.

“But let me be clear, the United States greatly values our strategic relationship with Turkey — that remains unchanged,” he added.

He added: “As long-standing NATO allies, our relationship is multilayered and extends well beyond the F-35 partnership. We will continue our extensive cooperation with Turkey across the entire spectrum of our relationship.

During the presser, he told reporters that the US government’s response was “a specific response to a specific event” and that it was “separate and distinct from the broader range of security interests” between the US and Turkey on “common threats”.

“Our military-to-military relationship remains strong, and we will continue to participate with Turkey in multilateral exercises to improve readiness and interoperability,” Mr Trachtenberg said.

His counterpart, US undersecretary of defence Ellen Lord also lamented that the DoD and US had been working hard to create an alternative to allow Turkey to buy air defence systems within NATO interoperability standards to keep Ankara in the F-35 partnership, but Turkey ‘did not listen’ by purchasing Russia’s S-400s over US Patriot missiles defence systems.

Turkey, a key NATO ally since 1952, received its first batch of S-400 components last Friday along with fourteen further shipments during the week. The move sparked Washington's fury, with US president Donald Trump stating that he would mull imposing sanctions on Turkey for its purchases. But the Turkish Foreign Ministry slammed the move as a unilateral step that would cause irreparable damage to ties between Ankara and Washington. Ties between Moscow and Ankara strengthened after the latter signed a $2.5bn loan for the purchases in December 2017, sparking condemnation from the US, who threatened to refuse Turkish pilots for F-35 training if Ankara failed to axe its partnership with Moscow.