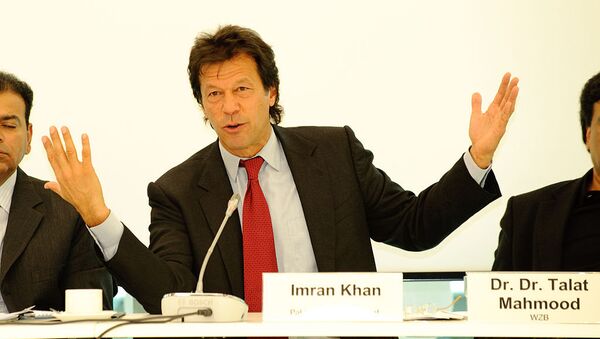 "The purpose of this visit is to press for concrete cooperation from Pakistan to advance the Afghanistan peace process... We are asking Pakistan to pressure the Taliban into a permanent ceasefire and participation in inter-Afghan negotiations that will include the Afghan government", the official said on Friday.

The official added that the US side will also encourage Pakistan to deepen and sustain its recent effort to crack down on militant terrorists within its territory. Moreover, the official said Trump will communicate to Khan that the United States is ready to repair relations and build a partnership if Pakistan changes its policies to address concerns of militants and terrorists seeking safe haven in their country.

The United States will also consider changing its suspension of security assistance to Pakistan if Islamabad meets Washington's concerns related to Afghanistan, the official said.

Both delegations will also discuss opportunities on trade and energy. The United States will also encourage Pakistan to ease restrictions on trade transiting the country between India and Afghanistan in order to create opportunity to enhance regional economic development.

The Pakistani delegation will visit the White House on Monday for a working meeting on a range of mutual interests.

The Afghan government has so far been excluded from peace talks between the United States and the Taliban, which began in early 2019 and focused on the withdrawal of foreign troops from Afghanistan. The Taliban say they will not start negotiations with the Afghan government until a timeline for US and other foreign troop withdrawal has been detailed.

Afghanistan is suffering in a deeply unstable political, social and security situation due to the activity of the Taliban movement and the Daesh terrorist group, as well as the presence of US and other foreign troops on its native soil. National security forces, supported by the international coalition, are involved in counterterrorism operations across the country.

International efforts aimed at settling the conflict have not resulted in significant progress.

According to media reports, the CIA sent Pakistani surgeon Shakil Afridi on a mission to find former al-Qaeda leader Osama bin Laden. Afridi entered the homes of bin Laden’s relatives in the city under the pretext of conducting a survey of hepatitis immunization.

Fluid samples were later compared with those of bin Laden’s sister who died in Boston in 2010.

In 2012, a Pakistani court convicted the surgeon of treason and sentenced him to 23 years behind bars. Afridi later said that he did not deny working for the CIA and claimed that he took pride in the mission.

*al-Qaeda, Daesh (IS, Islamic State, ISIL, ISIS) Taliban are terrorist groups banned in Russia and many other countries.