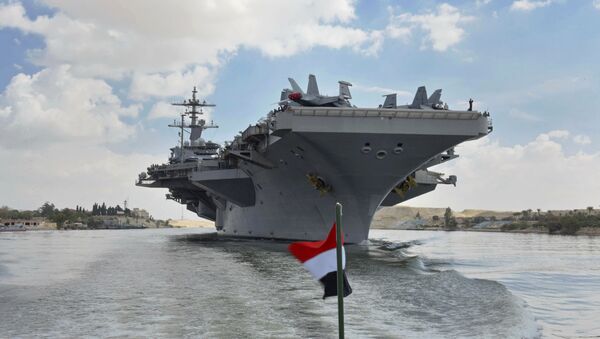 MOSCOW (Sputnik) - Russian President Vladimir Putin has said that Moscow is deeply concerned about the current confrontation between the United States and Iran, particularly as it is taking place near Russian borders and could destabilize the region surrounding Iran.

"This worries us very much because it is happening near our borders. It may destabilize the situation around Iran, affect some countries with which we have very close relations, cause additional waves of refugees in large numbers, may cause significant damage to the global economy and world energy industry", Putin said in an interview with US film director Oliver Stone.

Putin also has said Moscow would welcome any moves aimed at easing tensions in relations between Tehran and Washington.

"We would welcome any steps aimed at improving relations between the United States and Iran", Putin told US film director William Oliver Stone.

Earlier on Friday, Russia’s Deputy Permanent Representative to the United Nations, Dmitry Polyanskiy, told reporters that Moscow was concerned about reports of a seized United Kingdom-flagged oil tanker in the Strait of Hormuz and called for a de-escalation of tensions.

Polyanskiy stressed, however, that he did not want to make further comments about the reports before knowing the exact details of the incident.

Earlier in the day, Iranian media reported that the Islamic Revolutionary Guard Corps (IRGC) had seized the British-flagged oil tanker Stena Impero in the Strait of Hormuz because it violated international regulations.

The situation in the Persian Gulf and adjacent areas has deteriorated over the past months as several oil tankers were hit by explosions of undetermined origin. The United States and its allies blamed Iran for the incidents, but Tehran denies involvement.

The Iranian military in June downed a US drone, saying it violated Iran airspace. The Pentagon insisted that the drone was in the international territory and called the incident an "unprovoked" attack.

On Thursday, the Pentagon claimed that an alleged Iranian drone came within a "threatening range" of a US warship in the Strait of Hormuz before being shot down by US forces in a defensive action.

Iranian Deputy Foreign Minister Seyed Abbas Araghchi said, however, that Tehran believes the USS Boxer may have shot down its own unmanned aerial vehicle.

Tensions between the United States and Iran have been on the rise for over a year, starting when Washington pulled out of a landmark multilateral nuclear deal in May 2018 and unveiled the "toughest ever" sanctions on the Islamic republic.

Russia's position regarding the situation has been that everyone involved should resolve their differences through diplomatic negotiations. Moscow has also repeatedly condemned the overtly hawkish policy of Washington and its allies toward Tehran, stating that Iran has no aggressive intentions and praising its efforts to ensure regional stability.

Iranian Foreign Minister Mohammad Javad Zarif said that he could not definitely say how Russia would react if a military conflict broke out between Iran and the United States. He has added that Iran did not conduct its foreign policy under the assumption that any entity would come to its rescue.

Nevertheless, the foreign minister has admitted that Iran is close to Russia and China due to similarities between their national security interests.