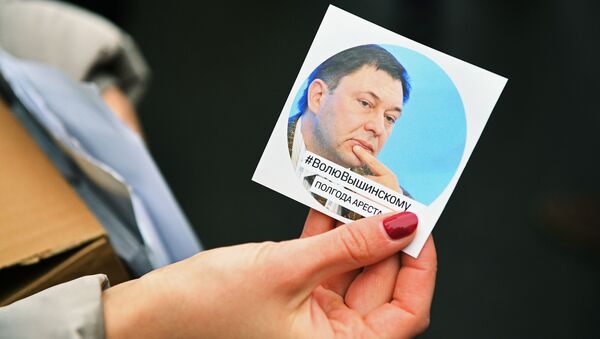 "As for Vyshinsky, if this is the first normal step, if this is the condition, then we are ready. We'll give you Vyshinsky if you want to, give us Sentsov", Zelensky told reporters, as aired by the broadcaster 112 Ukraine.

The Ukrainian president added that the exchange could become the first gesture of goodwill.

At the same time, Vyshinsky's lawyer Andrei Domansky cast doubt on the reports about a potential exchange of detainees, saying that the story was misleading and adding that a prisoner swap would require legal grounds.

"We hope that the Kiev court will reduce the precautionary measure and release our journalist from custody. Ukrainian legislation provides such a possibility", Karasin said.

Ukraine has mentioned Vyshinsky among Russian prisoners in Ukraine who could be exchanged for Ukrainians held in Russian custody as part of a swap, the deputy foreign minister noted.

Vyshinsky was detained on 15 May 2018, on suspicion of supporting the self-proclaimed republics in Ukraine's eastern Donbass region and treason. The harshest sentence the journalist faces is 15 years in prison.

Russian President Vladimir Putin has repeatedly said that Vyshinsky's arrest is politically motivated and demonstrates the former Ukrainian authorities' unacceptable policy of targeting journalists. Harlem Desir, the representative on freedom of the media at the Organisation for Security and Co-operation in Europe (OSCE), has also expressed his concern over Ukraine's actions toward Vyshinsky and called for the journalist's release. The organisation's secretary general, Thomas Greminger, has said that all OSCE member states should comply with international standards and avoid interfering in the media's work.