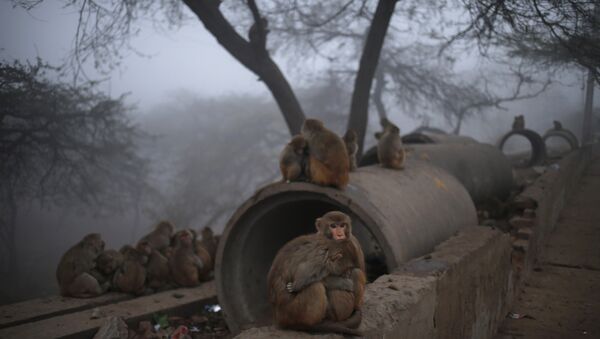 New Delhi (Sputnik): A notification by India’s Ministry of Environment, Forest and Climate Change last week to cull “vermin” monkeys roaming in the non-forested areas of northern Himachal Pradesh state has angered both animal rights activists and the general public.

Acting on a complaint lodged by the Himachal Pradesh government that monkeys (Rhesus Macaques) are extensively damaging property and harming people, the ministry's order is aimed at bringing the population of this species down, according to a report in the English language newspaper Times of India.

Earlier this week, it was reported that a plan was put into place to sterilise 1000 monkeys in the town of Almora, in the neighbouring state of Uttarakhand. According to the report, the local forest department has set up a sterilisation centre in the town's zoo, with 92 monkeys already sterilised.

Predictably, wildlife activists and some netizens reacted with horror and anger at the latest government order and demanded that it should be withdrawn immediately.

OMG ... The environment ministry has declared Monkeys as 'vermin' in Himachal Pradesh, allowing culling of #Monkeys in Shimla. This is not fair or humane. #Shimla#HimachalPradesh #India #OMG

This is shameful @CMOHimachal, esp. considering Hindu sensibilities. Instead, why not invite forest dept to export excess Monkey population to other national parks where they are few in number?https://t.co/d2BcPWz86R

Some appeared to welcome the government's decision to cull monkeys.

The Government of India finally recognizes those monkeys in Himachal Pradesh are vermin! https://t.co/u1LtfOEpHE

​Animal rights activist Gauri Maulekhi told the Times of India that it was wrongful of the country’s environment ministry and the Himachal Pradesh government to declare the monkeys “vermin”.

She further also said that this was clearly a case of mismanagement of both forests and wildlife.

She noted that first there was a campaign to sterilise the monkeys, and now there is an order to exterminate them.

Forest department officials claim that they are powerless in resolving the matter without offending the sentiments of animal lovers. Although monkeys are protected under the Wildlife (Protection) Act of 1972, they can be legally hunted down for a specified period, if they pose a danger to humans.