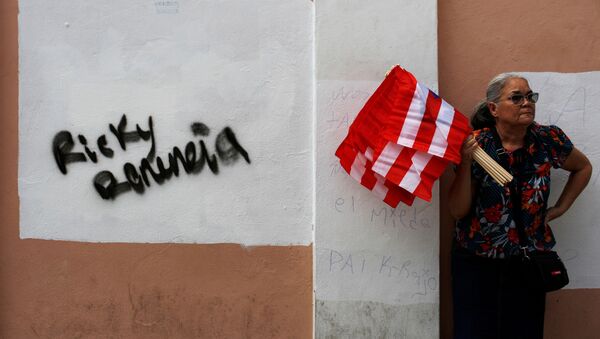 Puerto Rican civil groups and labor unions have called for a massive protest outside the governor’s mansion in San Juan Friday, as Governor Ricardo Rosselló continues to resist popular calls for his resignation. As the protests enter their seventh day, Boricuas are unleashing their most potent weapon yet: the “cacerolazo,” or pot-banging.

Sputnik News analyst and By Any Means Necessary producer Bob Schlehuber reported from the city Friday, noting in a Facebook Live broadcast that “the first time for these large unions to come together in a political protest such as this, calling for the governor’s resignation.” The video shows thousands of demonstrators marching along an embankment toward the governor’s mansion.

Organizers are hoping to recreate the fervor seen Wednesday, when hundreds of thousands of Puerto Ricans marched from the Capitol building across town to the governor’s mansion, known as “La Fortaleza” - the fortress. Climaxing in dramatic confrontations between riot-geared police and fireworks-armed protesters, the demonstrations showed the heights to which popular anger has risen since the publication of a trove of scandalous Telegram messages between Rosselló and top Puerto Rican officials.

In the roughly 900 chat messages published last week by investigative journalists, the roughly one dozen men mocked, derided and taunted everyone from pop singer Ricky Martin, to citizens they’d posed with in photos, to the dead who perished in Hurricane Maria.

"Unfortunately there is always corruption in the government," Pamela Calderón, who owns a small restaurant on Calle San Jose, near where the Wednesday showdown occurred, told CNN. "But with the publication of the chats, people in Puerto Rico saw how the corruption affected the response to the hurricane. There's a sense of, 'You left us to die.'"

"There are still people without electricity or a roof," she said. "There is a perception of being abandoned by the government, a lack of planning, and the inept way government managed the crisis."

“Like never before, all factions of the country agree that Ricardo Rosselló has to go,” Juan Cortés, president of the Central Federation of Workers labor union, said in a statement, according to Reuters.

So far, though, Rosselló has resisted calls to resign.

"I recognize the challenge that I have before me because of the recent controversies, but I firmly believe that it is possible to restore confidence and that we will be able, after this painful process, to achieve reconciliation," the governor said in a statement posted to Twitter Thursday.

​As a result, massive demonstrations began Friday afternoon, with folks showing up to Bahía Urbana, near the entrance to the old city that houses the governor’s mansion, for what was widely announced to be a cacerolazo by using the hashtag #CacerolazoNacional.

"Although the unions are the conveners, it is a call for people. We are calling for everyone to bring their casserole [dishes]. Friday will be the day of 'cacerolazo.' We are going to carry a different and creative protest message,” Ángel Figueroa, president of the Union of Workers of the Electrical and Irrigation Industry (UTIER), told Telesur. He said anyone who cannot reach San Juan for the 5 p.m. protest should “carry out a demonstration in the public squares” locally. “Pull out the pots to express their feelings.”

#PuertoRicoMarcha begins shortly with unions coming together to call for the resignation of Governor Rossello #RickyVeteYa pic.twitter.com/tXioJGElZH

​However, social demands are also beginning to accompany the calls for Rosselló’s departure. Figueroa noted that "all of us here are demanding that a state of emergency be declared for the gender violence that our country is experiencing, and we demand that the PROMESA Law be repealed,” referring to the 2016 act by the US Congress establishing an undemocratic oversight body with near-dictatorial power over the island’s finances. Islanders call PROMESA simply “la junta” - the board - and have grown increasingly frustrated with Rosselló’s inability to stand up to it.

​Puerto Rico was seized by the US Army in 1898 amid the United States’ war with Spain. Then a Spanish colony, the island became a US territory - which nationalists and critics alike have derided as nothing but a changing of terms and not of relationships. Puerto Ricans are divided over whether to seek independence from the US or attempt to join it outright as the 51st US state.

Several US presidential candidates have also come down on the side of the protesters, with Julián Castro and Tulsi Gabbard expressing their solidarity and demanding Rosselló resign.