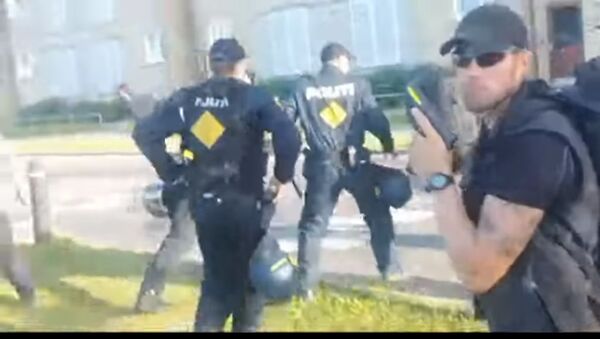 According to Rasmus Paludan, who heads Denmark's “most anti-immigrant party”, this is the first time in the nation's history the police have been forced to draw a firearm to protect a politician.

Pistols were unholstered as the Danish police had to protect the security of Rasmus Paludan, leader of the immigration-critical party Stram Kurs (“Hard Line”).

Paludan's visit to the immigrant-heavy area of Tingbjerg in Greater Copenhagen (officially designated as a “ghetto”) sparked strong reactions, and the police had to step in and protect the nationalist leader from aggressive locals.

Stram Kurs's public meeting was first disturbed by immigrants who played oriental music at high volume, seemingly to disturb Paludan from speaking. By his own admission, Paludan had to “step about 10 metres to the side” for the sake of his livestream.

Then, three masked people dashed at the party leader, whereupon the police officers had to step in and draw their weapons.

“Stop, stop, get away”, the police are heard shouting in a video posted by Stram Kurs.

In another clip, Paludan explained that the police were forced to evacuate him immediately.

“This is the first time in Danish history that the police are forced to pull firearms to protect a politician”, Paludan declared.

Stram Kurs was founded in 2017 and identifies as “ethno-nationalist” and by its own admission campaigns to reach “a Denmark for Danes”. This year, it skyrocketed from a fringe party to national prominence through its “free speech” demonstrations in troubled migrant areas. As the party has made a habit of burning the Quran during its public meetings, their demonstrations have often sparked riots despite police surveillance.

Rasmus Paludan is seen as a highly controversial figure by the Danish establishment, even by fellow right-wingers. Stram Kurs advocates banning Islam in Denmark, expelling refugees and cancelling Danish citizenship for non-European immigrants. Paludan himself has repeatedly warned against Danes becoming a minority in their own country.

In the 2019 general election, Stram Kurs barely missed the parliamentary threshold of 2 percent.