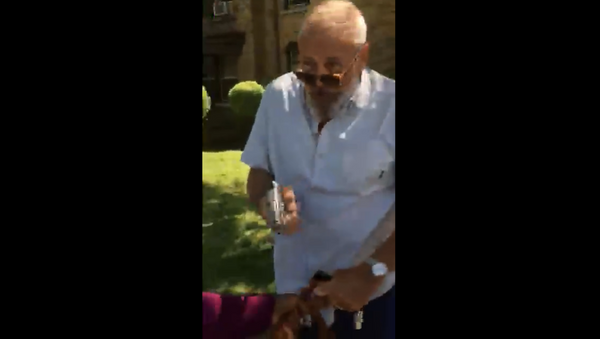 © Screenshot/Santiaga Precious
Subscribe
Jeffrey Calhoun, a resident of Lockport, New York, found himself in handcuffs and hit with a variety of charges after he was filmed pulling a firearm on a woman following a minor traffic accident.

Video, which was filmed and later shared on Facebook by Precious Santiaga, captures the interaction between Calhoun and Jeanneie Muhammad moments after the pair were involved in a fender bender-type collision. The altercation unfolded on Tuesday at roughly 11:25 a.m. local time.

The recording begins with both Santiaga and an individual off-camera urging Calhoun to let go of Muhammad, who’s heard telling Calhoun to release his hold on her bag while she attempts to pull away. A third individual dressed in all black clothing can be seen talking with Calhoun during the interaction, however, it’s later determined in the video that he was trying to determine what exactly was going on.

Video shows that the incident gets kicked up a notch after Calhoun allegedly tries to bite Muhammad. “Yo, you can’t bite her,” a man off-camera can be heard repeatedly yelling out at Calhoun. It’s at this point in the recording that Santiaga makes her way toward the scene, deciding to confront Calhoun head-on.

“Get the f**k off her right now,” Santiaga yells at Calhoun. “Why are you hitting on her? Get off her purse.”

Within seconds, Calhoun pulls out a handgun as he tells Santiaga and fellow bystanders to “get the f**k back.” He adds, “Nobody hit me no more. Nobody hit me.”

Calhoun is filmed continuing to keep a firm grasp on Muhammad’s purse, and when questioned by Santiaga about his decision to show his gun to the growing crowd, he explains that he pulled the firearm out “because there’s a bunch of people coming.”

During the altercation, the man seen earlier in the footage wearing all black clothing is heard off-camera explaining, “[Muhammad was] hitting [Calhoun] and he’s trying to hold her - she’s trying to leave.”

The incident eventually comes to a close after police arrive on the scene.

Calhoun was ultimately cuffed and sent to the slammer after being charged with one felony count of first degree attempted robbery, one misdemeanor count of second degree menacing and a violation of second degree harassment.

Muhammad, who was joined by members of the National Association for Equal Justice in America during a Wednesday press conference, wants more charges added. She requested officials prosecute Calhoun “to the full extent of the law” and classify the incident as a hate crime.

Muhammad has also alleged that Calhoun directed racial slurs at her while he in the police cruiser. “While he was sitting in the car, he looked at me and said, ‘You n***er, you probably didn’t even have insurance,’ and I said, ‘Oh be quiet,’” Muhammad recalled. “So we’re going back [and forth] like this, [and] the police officer said, ‘Ma’am you can’t have this exchange.’ And he walked me down the street.”

According to the Buffalo News, Calhoun is scheduled to appear in court on July 22.

000000
Popular comments
Heavily medicated, heavily armed nation. Minor traffic accident.
Foxylady
18 July 2019, 22:21 GMT
000000
I can see how he felt threatened by all the people who were drawing too close into his personal space, but he went too far by pulling his gun and pointing it at a crowd and the woman who rear-ended his car. This woman is as guilty as him, because she tried to run away from the scene and he wouldn't have that happen lol. Again, bringing a gun into this traffic dispute is a huge NO. This woman should be heavily fined as well, first for rear-ending a car in front of her and second, for trying to run away from the traffic accident scene.
Rick James
18 July 2019, 22:33 GMT
000000
Newsfeed
0
New firstOld first
loader
LIVE
Заголовок открываемого материала
Access to the chat has been blocked for violating the rules . You will be able to participate again through:∞. If you do not agree with the blocking, please use the feedback form
The discussion is closed. You can participate in the discussion within 24 hours after the publication of the article.
To participate in the discussion
log in or register
loader
Chats
Заголовок открываемого материала
Worldwide
InternationalEnglishEnglishMundoEspañolSpanish
Europe
DeutschlandDeutschGermanFranceFrançaisFrenchΕλλάδαΕλληνικάGreekItaliaItalianoItalianČeská republikaČeštinaCzechPolskaPolskiPolishСрбиjаСрпскиSerbianLatvijaLatviešuLatvianLietuvaLietuviųLithuanianMoldovaMoldoveneascăMoldavianБеларусьБеларускiBelarusian
Transcaucasia
ԱրմենիաՀայերենArmenianАҧсныАҧсышәалаAbkhazХуссар ИрыстонИронауОssetianსაქართველოქართულიGeorgianAzərbaycanАzərbaycancaAzerbaijani
Middle East
Sputnik عربيArabicArabicTürkiyeTürkçeTurkishSputnik ایرانPersianPersianSputnik افغانستانDariDari
Central Asia
ҚазақстанҚазақ тіліKazakhКыргызстанКыргызчаKyrgyzOʻzbekistonЎзбекчаUzbekТоҷикистонТоҷикӣTajik
East & Southeast Asia
Việt NamTiếng ViệtVietnamese日本日本語Japanese俄罗斯卫星通讯社中文（简体）Chinese (simplified)俄罗斯卫星通讯社中文（繁体）Chinese (traditional)
South America
BrasilPortuguêsPortuguese
NewsfeedBreaking
02:17 GMTUS House Passes National Defense Authorization Act to Fund Pentagon in Fiscal Year 2022
01:51 GMTSpain to Respect Verdicts of Italian Courts on Puigdemont – Government
01:14 GMTUS Judge Orders Facebook to Turn Over Deleted Posts That Promoted Hate Toward Rohingya People
01:07 GMTLeader of Drought-Stricken Madagascar Urges UNGA to Take Tougher Action Against Climate Change
00:43 GMTBatting Below the Poverty Line: How MLB Exploits Its MiLB Workforce
00:37 GMTPakistan-Afghanistan Border Clash Reportedly Caused Deadly Stampede
YesterdayNY Gov. Hochul Announces Resignation of State Health Commissioner Who Oversaw Nursing Home Scandal
YesterdayBipartisan US Majority Wants Government to Hold Big Tech Responsible for Content - Poll
YesterdayUS House Committee Chairman Issues Subpoenas to Meadows and Bannon Over Jan 6 Riot
YesterdayTwitter Says Bitcoin Now Part of its Tipping Service
YesterdayBurundi's Prosecutor General Says MSD Opposition Party Leader Behind Series of Terror Acts
YesterdayVideo: Protesters Storm Namibia’s Parliament as Opposition Rejects ‘Fake Genocide Deal’ With Berlin
YesterdayUS Stocks Rally for 2nd Day as Federal Reserve Assures Care Over Stimulus Taper
YesterdayOut-Torying the Tories? Labour Leader’s ‘Vision’ Pamphlet Lays Out Return to Blairism
YesterdayFBI Issues Arrest Warrant for Brian Laundrie in Connection to Gabby Petito's Death
YesterdayItalian Authorities Arrest Ex-Catalan Head Carles Puigdemont, Spanish Media Reveals
YesterdayRussian Rescuers Searching for 19 Elbrus Climbers in Distress, One Found Dead
YesterdayMoscow Regrets Oberlander Evaded Punishment – Russian Embassy in Canada
Yesterday‘Perhaps You Remember Your First Edible’: Brian Williams Zinger After Montage Gets Internet Rolling
YesterdayCDC Panel Endorses Pfizer Booster Shots for Older, At-Risk Americans