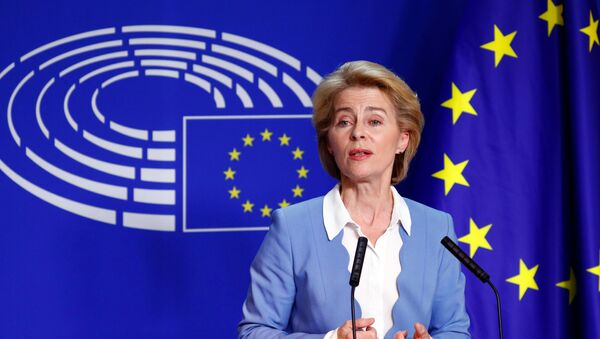 "Von der Leyen will be a slave not only to [French President Emmanuel] Macron and [German Chancellor Angela] Merkel, but also to that shameful group of ‘old school’ politicians of the traditional parties who have organised an undemocratic ‘sanitary cordon’ around our party, the League, to keep us out of the Parliament's leadership", Bizzotto said.

According to the lawmaker, by voting for von der Leyen, the European Union decided to take the road of "no return" as well as that of "nomenklatura."

"After her lecture in Strasbourg, there was no good reason to vote for von der Leyen as president of the EU commission. The new Europe starts badly, and Ursula will be the worthy heir of [incumbent European Commission President] Jean-Claude Juncker and the Franco-German interests headed by Macron and Merkel", Bizzotto said.

On Tuesday, the European Parliament approved von der Leyen as the president of the European Commission in a 383-327 vote. Some critics of von der Leyen's nomination have reportedly branded it as a "backroom" deal between Germany and France.

In her address to the European Parliament, von der Leyen promised a "green deal for Europe" as well as put forward an idea of ending EU member states' veto on foreign policy and moving to a qualified majority voting instead, among other issues. She is set to take office on November 1.