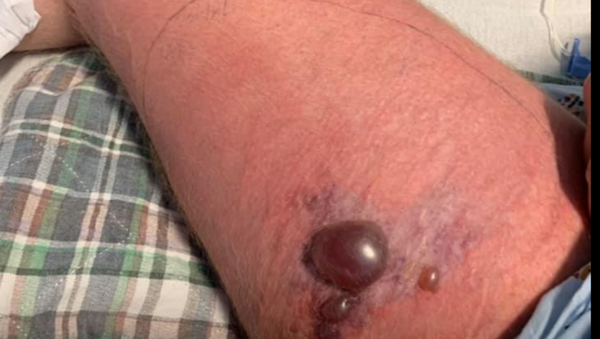 Ricky Rutherford, a 41-year-old man from Alabama, has been fighting for his life in the hospital since contracting a flesh-eating bacteria infection while kayaking at Second Creek in the Heart of Dixie on July 6.

Rutherford’s wife, Cassey, confirmed Monday that her husband was in the intensive care unit at the state’s North Alabama Medical Center. “Yesterday, it was confirmed through the cultures they took that it was flesh-eating bacteria. It’s called necrotizing fasciitis,” she said.

“We put in at Second Creek and we kayaked back to High Banks where there’s a swimming hole back there. It’s beautiful. We went swimming, and then we got a storm. We waited it out and left,” Cassey explained to local news station WAFF 48. However, just a couple days later, Ricky began experiencing a 103-degree Fahrenheit fever, and his legs started cramping. Soon after, he began to notice redness and swelling on one of his legs.

“When he undressed, he found his leg was red and swollen,” Cassey wrote in a July 10 Facebook post. “We immediately went to the ER last night and they told us it was cellulitis possibly contracted from our kayaking trip Saturday and treated him with IV antibiotics and sent him home with two more. They told him if there was any change to come back.”

However, it wasn’t long before Ricky was back in the hospital.

“They had to remove a five-inch-by-six-inch piece of his inner thigh. At that time, they took cultures of what was going on in there,” Cassey explained, adding that the cultures revealed that her husband had been exposed to flesh-eating bacteria.

“It’s been up and down, touch and go. On Saturday, the doctors told me that they assumed by Saturday night that he would be on life support and that he was capable of dying,” she told the station. “They told me to prepare for the worst.”

The wife also noted that her husband didn’t have any open wounds or visible scratches on his leg when he got in the creek.

“There was nothing. But the doctors told us it could be a microscopic hole that it could come into and still spread like that. It’s hard to believe that there was a group of us, and my husband, [having] the healthiest immune system there, got this. He’s never sick. He doesn’t even have a doctor. To know that he got that when the rest of us didn’t is insane,” Cassey said.

“I don’t want anyone else to go through this. On Saturday, I was having to think about burying the love of my life. No one should ever have to go through that,” Cassey added. “Do not get in that water! It’s not safe. Don’t jeopardize your family for a day of fun. It’s right here in our backyard.” The Rutherford family did not immediately respond to Sputnik’s request for comment.

However, according to a Thursday Facebook post by Cassey, her husband is getting stronger by the day.

“He is starting to stay awake a little more and the biggest improvement of all is they were able to move his oxygen down to a nasal cannula and his levels stayed good all through the night. I see him getting stronger and stronger day by day and I’m just ecstatic!” she wrote.

According to the US Centers for Disease Control and Prevention, there are several types of bacteria that can cause necrotizing fasciitis.

“These bacteria include group A Streptococcus, Klebsiella, Clostridium, Escherichia coli, Staphylococcus aureus, and Aeromonas hydrophila. Public health experts consider group A strep to be the most common cause of necrotizing fasciitis,” the CDC writes on its website.

“In cases of necrotizing fasciitis, bacteria spread quickly once they enter the body. They infect the fascia, connective tissue that surrounds muscles, nerves, fat, and blood vessels. Sometimes poisons made by these bacteria destroy the tissue they infect, causing it to die,” the CDC explains.

Symptoms can start just a few hours after one is exposed to the bacteria and initially feel like the soreness of a pulled muscle. However, eventually, one’s skin can become warm and swollen, changing to a red or purple color.