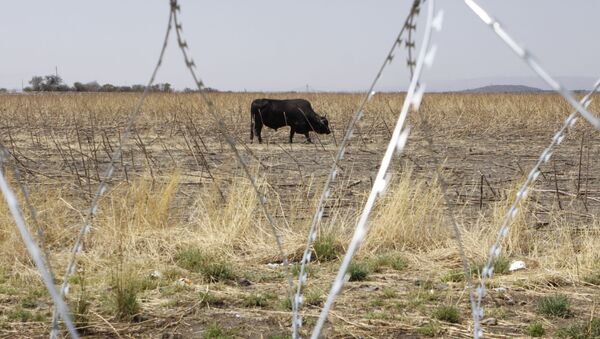 The farming community in South Africa has been shocked by another murder, as a 67-year-old man and his 62-year-old wife were reportedly attacked by a gang suspected of being behind another deadly assault against an elderly couple in May. According to Freedom Front Plus, there have been 60 farm murders since the beginning of 2019.

Sakkie van der Berg, 67, and his wife Ina, 62, have been found murdered on their farm in the Free State province in South Africa. As local media reported, the two were discovered dead and tied up in their own kitchen by a neighbour. According to Police Sergeant Wendy Nkabi, cited by the local website News24, suspicions that something bad happened were raised when the farmer did not show up for his morning routine.

Police said that van der Berg had spotted two apparent strangers walking on the farm when he was giving his employee a lift to the town of Boshof on the day of the tragedy. He asked the worker about them, but the latter did not know the trespassers either.

The man was reportedly attacked by six suspects when he returned home and opened the farm gate.

“He was then taken back to his house where, together with his wife, [he was] tied up, brutally beaten and shot. They both died at the scene”, local authorities stated, as cited by The Daily Mail, noting that the attackers then searched through the house, stealing things, including firearms.

During the 72-hour lockdown, five suspects were arrested, while an alleged sixth accomplice managed to flee. The stolen guns were recovered on a nearby riverbed. The suspects in custody are set to be charged with murder, aggravated robbery, theft, and possessing unlicensed firearms.

There have been reports that the main suspects could have been behind another farm murder in May, when DA Councillor Monica Deniacos, aged 68, and her husband Basil, 74, were killed.

The Freedom Front Plus (FF Plus), whose agenda includes fighting crime in South Africa’s rural areas, said that they had asked the Free State's authorities to discuss creating a rural safety unit there.

"If there had been proactive policing in the district, both these murders could have been prevented. The MEC and minister cannot keep ignoring farm attacks,” said FF Plus’s Armand Cloete said, as cited by The South African.

According to the party, at least 60 farm murders and over 200 attacks have been committed across South Africa since the beginning of 2019. A report released by the Afriforum group, which champions the rights of the country's Afrikaner minority, says that attacks on white South African farmers skyrocketed by 25 percent in 2018, with assailants using electric drills, blowtorches, and bleach against some of the victims.