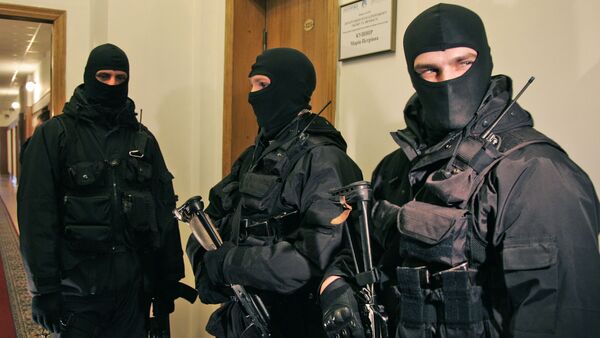 © AP Photo / Efrem Lukatsky
Subscribe
DONETSK (Sputnik) – A secret jail of Ukraine’s special operations Azov Battalion, under the auspices of the country’s Security Service (SBU), located at the Mariupol Airport, worked at least until November 2018, according to a SBU document, obtained by Sputnik, which also showed that the service tried to avoid information leaks about the jail.

No facts show that the jail's operations have stopped. Moreover, according to the SBU document and a former detainee's story, which are part of an investigation by Sputnik, money was extorted from victims and their relatives in exchange for the release of those detained.

The second part of the Sputnik investigation features a report by Sergei Stetsenko, a high-ranking SBU counterintelligence officer from Mariupol, dated 1 November 2018. In the report, Stetsenko details his contacts with his "agent Reno" — an alleged Ukrainian serviceman, who informed the officer about sentiments among Ukrainian Armed Forces personnel.

Liudmila Momot, a local resident, has asked Reno to help her find her son, who went missing on 3 October 2018. She told Reno that a week after her son went missing, an unknown person called her, saying that her son was at an airport and it was possible to release him if she pays $3,000.

​The pensioner did not have the money so she asked Reno for help because he was "a high-ranking serviceman".

Stetsenko, for his part, promised Reno he would settle the situation.

Another witness, Pavel Karakosov, who has survived torture and simulated shooting in a detention facility at the Mariupol Airport, said that those killed were buried under numbers assigned to them, but no names were ever specified.

Karakosov suggested that there could be mass graves in Mariupol, including in the vicinity of the jail.