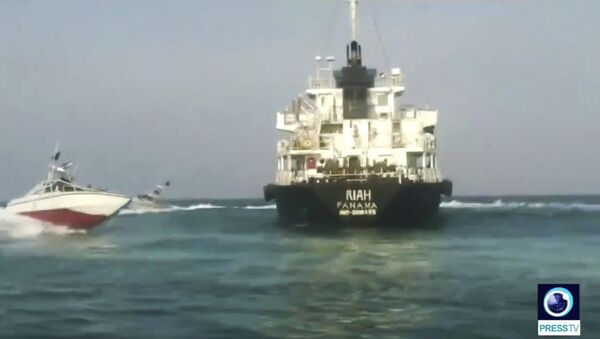 Earlier on Thursday, it was reported a tanker was seized with a 12-strong crew aboard for smuggling fuel from the Iranian side to foreign customers.

Iran's state TV English-language channel has posted a video of a seized tanker that reportedly "smuggled" fuel out of the country, in the Persian Gulf.

​​Iranian media reported earlier in the day that a tanker was seized with a crew of 12 aboard for smuggling fuel from the Iranian side to foreign customers and was intercepted south of Iran's Larak Island in the strategic Strait of Hormuz. It did not specify, though,  the vessel number or identify the nationalities of the crew onboard.

On Sunday, an allegedly UAE-based Panamian-flagged oil tanker, MT Riah, vanished from radars when sailing across the Strait of Hormuz.

An unnamed US defense official told The Associated Press that America “has suspicions” that Iran seized the MT Riah tanker based in the UAE, however the Emirates shortly busted claims that the ship was owned or used by the country.

The 190-foot vessel was last mapped in the vicinity of Iran, near the island of Qeshm, which hosts a local Revolutionary Guard base, according to Haaretz.

Oil tankers have been lately targeted in a series of sabotage attacks in the area. Four tankers in the Gulf of Oman, belonging to Norway, the UAE and Saudi Arabia, were left crippled in a series of  explosions that damaged their hulls in May 2019.

While an investigation by the UAE has failed to determine who was behind the "sabotage", the US has accused Iran of it, with the latter flatly denying the claims. Iran has denounced alleged false-flag operations aimed against it, warning that they lead to instability in the region.

Besides the oil tanker incidents, the Persian Gulf region became central in a row over Iran's long-suffering nuclear deal clenched with world powers, with one of Iranian tankers being seized in early July by British Marines in Gibraltar.

The Iranian supertanker Grace 1 was stopped on suspicions that the vessel was transferring crude oil to Syria from Iran in violation of EU sanctions, as Iran stepped up efforts to push for better conditions under the 2015 deal that the US unilaterally pulled from in May 2018.