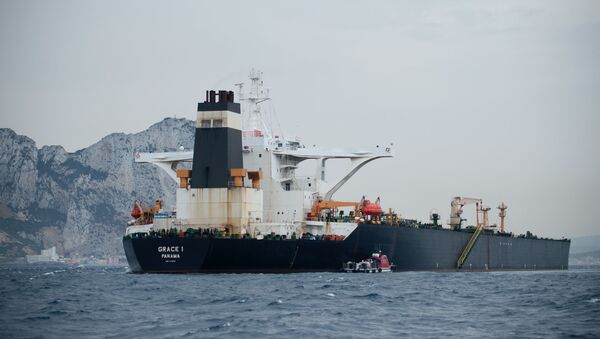 On 4 July, the government of Gibraltar said its law enforcement agencies, assisted by the Royal Marines, had detained an Iranian supertanker loaded with an estimated two million barrels of crude oil. Gibraltar Chief Minister Fabian Picardo said that his government "had reasons to believe" that the tanker was headed to the Banyas Refinery, which belongs to an entity subject to EU sanctions against Syria. Iran denied that the Grace 1 was transporting oil to Syria for refinement.

Earlier, Iran's Zarif, in a phone conversation with UK Foreign Secretary Jeremy Hunt, stressed that Tehran would continue oil exports under any circumstances and urged London to immediately release the Grace 1. Hunt said, following phone talks with Zarif, that the UK would facilitate the release of the Iranian supertanker if Tehran could guarantee it's destination.

Gibraltar police released the four crew members, who had been detained and interrogated earlier this month, on bail.

The news comes amid a tense situation in the Persian Gulf over Washington's 2018 unilateral withdrawal from 2015 Iran nuclear deal, also known as the JCPOA.

On Thursday, Iran said that it had seized a foreign tanker under a UK flag allegedly smuggling oil in the Persian Gulf.

On Sunday, the Riah oil tanker reportedly stopped transmitting its location, albeit not signaling distress. Shortly after, several media reported, citing a source in the US Defense ministry, that the United States suspected Iran of seizing the Riah, which is affiliated to a UAE port and was being detained in Iran's territorial waters near the IRGC base.

The regional situation has deteriorated over the past couple of months as several oil tankers were hit by explosions of undetermined origin. The United States and its allies blamed Iran for the incidents. The Iranian military then reported it had downed a US drone, saying the device had violated Iran airspace.

Earlier on Thursday, the Pentagon said that an alleged Iranian drone came within "threatening range" of a US warship in the Strait of Hormuz before being destroyed by American forces in a defensive action.

The administration of US President Donald Trump called to condemn Iran's attempts to disrupt what the US described as freedom of navigation and global commerce and to protect their ships as they transit the Strait of Hormuz, as well as work with the US in the future.

Iran has repeatedly rejected all accusations by the United States and accused Washington of seeking to fabricate a pretext for war.