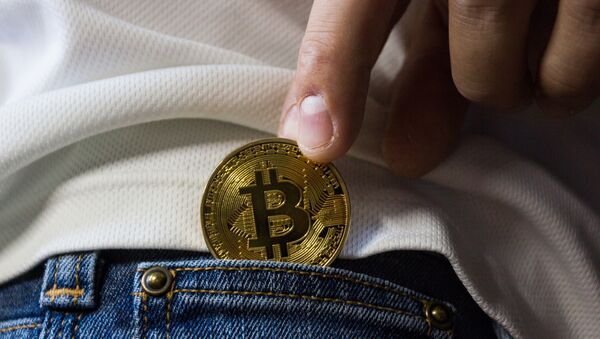 Bitcoin has suffered a significant setback after plunging in value by thousands of dollars to take the cryptocurrency’s price to below $10,000. The losses mean bitcoin has shed more than a quarter of its value over the last seven days. Dr Iwa Salami from The University of East London commented on the issue.

Sputnik: What are the causes of this [recent Bitcoin] crash?

Dr Salami: Firstly it's been the statements recently of President Trump and also his treasury secretary Steven Mnuchin, around the problems with Bitcoin and particularly linking Bitcoin with criminal activities and describing it as a purely speculative asset and therefore requiring proper regulation. So that obviously hasn't gone down very well. I think much more than anything else are the technical indicators as well.

These predicted the value of Bitcoin dropping around the time that we began to see the cryptocurrency dip. Primarily, the main indicator here being what is known as the ‘moving average convergence divergence (MACD) histogram – an indicator used to identify trend changes of assets - which predicted that there was going to be a fall in the price of bitcoin around this time.

Because the previous predictions have been reliable, it's believed that investors kind of felt that this would be an indicator to actually take on board. So these are two major factors that could explain why the price of bitcoin may have dropped.

Sputnik: With Facebook's new cryptocurrency, Libra, being released soon; is this the end of Bitcoin?

Dr Salami: It depends on the perspective from which things are being viewed. Some believe that the introduction of Libra would certainly be one that boosts the value of other cryptocurrencies.

This may also be the reason why the price of bitcoin and other cryptocurrencies went up in the aftermath of the announcement of Libra through the white paper released by Facebook.

Sputnik: This isn't the first major crash we've seen for the cryptocurrency. Can Bitcoin regain its value in upcoming weeks?

Dr Salami: Bitcoin has had a history of very sporadic and wild fluctuations since its inception and this just speaks to the heart of the drawbacks of bitcoin. It's hugely speculative as an asset, the criticisms around it not being tied to anything but the whims of how investors are feeling or whether they're prepared to take risk; we don't have anything that we can measure the prospects of Bitcoin by and that’s why we say it's a purely speculative asset and its history has been characterized by wild fluctuations. If we have another competitive cryptocurrency coming out, that may boost the value or undermine the value depending on how investors are feeling and depending on how the market reacts to the news.

I think, as I said earlier, looking at technical indicators that provide a history around trend changes of coins and cryptocurrencies such as Bitcoin might be the way for investors to predict movements in the prices of cryptocurrencies that are not tied to anything, going forward.

Views and opinions, expressed in the article are those of Dr Iwa Salami and do not necessarily reflect those of Sputnik.