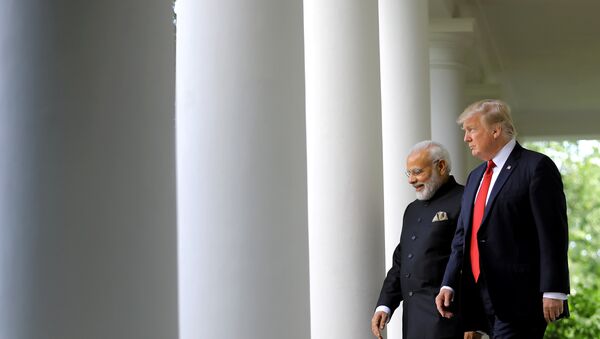 New Delhi (Sputnik): By acting against key NATO ally Turkey for going ahead with the purchase of Russia's S-400 surface-to-air missile systems, the United States has sent a message to other countries that it remains a sensitive issue for them to buy Russian defence equipment, a former Indian diplomat has said.

President Donald Trump has announced the US will not sell F-35 fighter jets to Turkey since Ankara purchased the S-400 missile defence system from Russia, on the grounds that it “cannot co-exist with a Russian intelligence-collection platform that will be used to learn about its advanced capabilities".

Ambassador K.P. Fabian, India’s former envoy to several countries, said that he does not expect Washington to take similar actions against India, despite the latter firmly conveying to the Trump administration that New Delhi is going ahead with the purchase of S-400 missiles because it was in its national interest.

Sputnik: The United States has taken retaliatory action against Turkey for purchasing the S-400 missile. Will this US action on Turkey have some kind of bearing on thought processes in New Delhi?

Ambassador K.P. Fabian: I doubt it because to my mind India has gone about it the wrong way in the sense of asking the United States for waivers. India has unnecessarily weakened its hand. India should have told the United States discreetly through diplomatic channels, "Listen, we are going to go ahead with the S-400 because we need it. We are not seeking any waivers, but if you want to go through the charade of giving us a waiver for public show, well we can consider that".

So they (India) should have taken a more forthright and stronger position, but I don’t expect the United States to take any action against India for the purchase of the S-400. Only thing is that they will keep it (the options of sanctions) there.

Sputnik: Turkey has described this action by the United States as “unfair” and “incompatible” with the spirit of NATO and their bilateral alliance, and not legitimate or justified. How would you respond to this charge?

It is not clear whether Turkey has paid for, or made partial payment for the S-400 missile, probably it has. So that is only one part of the story. What we have to understand is that apart from taking Turkey out of F-35, the United States will resort to other measures also because, you know, they have something called CAATSA (Countering America's Adversaries through Sanctions Act) to counter anti-American actions through sanctions.

Sputnik: Is there a history of these differences in geopolitical and defence perception between the United States and Turkey?

Ambassador K.P. Fabian: We have to also understand it from a historical point of view in the sense that Turkey holds and owns the Incirlik Air Base, a very big airbase where the US Air Force has a presence, probably 5,000 American airmen. Now, this is of crucial importance to the United States for its regional military operations.

In 1975, something happened. In 1974, Turkey invaded Cyprus and America raised sanctions against Turkey saying that Turkey had used American weapons. Then Turkey responded by telling the United States to stop using Incirlik and finally the United States had to lift the sanctions and then only did Turkey grant it the use of the airbase.

So while the United States has the wherewithal to take many measures against Turkey, Turkey also has certain things. So let’s see how this will work out.

Sputnik: Is the US move correct in principle, especially when Turkey is one of Washington’s key NATO allies?

Ambassador K.P. Fabian: Yes, that is true. I mean in terms of what the United States is specifically saying – but, I don’t have the technical expertise to say whether it is correct or not; that the presence of the S-400 in Turkey, well if there are F-35 aircraft also there, there is a risk of the Russians coming to know more about the F-35 which will be quite harmful to United States military secrets. But I don’t think it is a really good argument because the F-35 can be stationed somewhere far away from the S-400. As I said, I expect there will be other measures taken by the US against Turkey.