British Worries Over Crimea Were Dismissed by Kiev – Archives 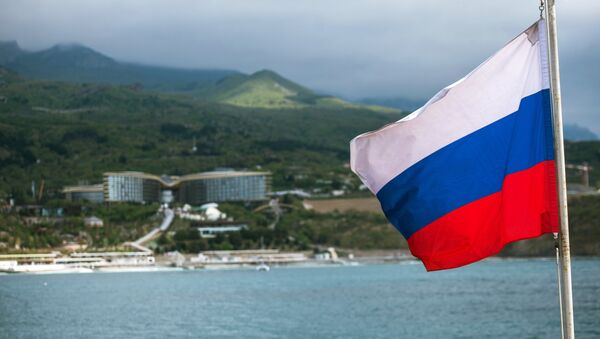 Nikolai Gorshkov
All materials
London warned Kiev of dire consequences, when in 1995 Ukraine suspended Crimea’s autonomy and deposed popularly elected Crimean President, but the warning was dismissed by Ukrainian leaders, as the UK government papers released by the National Archives reveal.

Crimea’s drive for reunification with Russia which peaked in early 1995 was quashed by Kiev through intimidation and coercion but as top British diplomats told Ukrainian ministers the Crimean issue remained.

Sir Nicholas Bonsor, UK Minister of State for Foreign Affairs paid a visit to Ukraine on the heels of Kiev’s move to suspend Crimea’s autonomy. He made a point of going to Crimea to show British concern over the situation there.

The Ukrainian Foreign Minister Gennady Udovenko and his deputy Vladimir Khandogiy assured him that the situation was stabilizing and that violent incidents were of purely criminal character.

Asked whether the Russian parliamentary elections that year might destabilise Crimea, Ukrainian President’s adviser for domestic affairs Dmitry Vydrin said that “few Russian politicians would score points by raising the issue, given that the voters were now less interested in preservation of their Crimea sanatoria. The number of Russians going to Crimea for the summer had fallen by a factor of 12, as more and more were opting instead for holiday resorts in Spain, Turkey and Cyprus etc.” 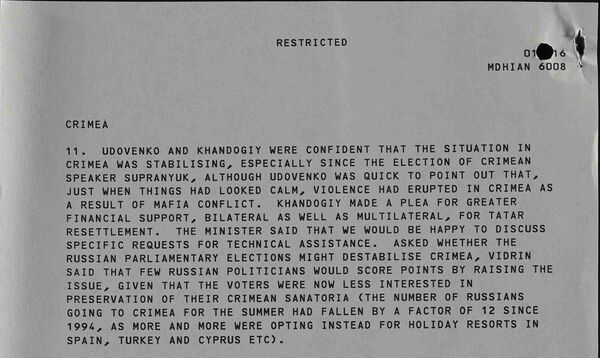 It shows how little did Ukraine’s top politicians understand Crimea’s aspirations. To them it was all about Russians holidaying in Crimea! Not about the Crimean Russian majority and their rights, not about the myriad ties with mainland Russia, not about the special place of Sevastopol in Russian national psyche or its crucial role in Russia’s national security. It’s also strange that the very people, who should have been concerned with bringing more revenue to Ukraine’s state coffers depleted by the economic crisis, were rejoicing in the fact that the flood of tourist money from Russia had dropped to a trickle. No wonder, Crimean tourist infrastructure fell into disrepair over the years of Ukrainian rule. Instead of competing for the Russian tourist money, Ukrainian ministers were happy that the Russian holidaymakers switched to Spain, Turkey and Cyprus! Did they ever ask themselves why all those Russians who had been coming to Crimea for decades suddenly preferred Turkey and Cyprus? And why were the Russians not replaced by tourists from other countries?

The British Foreign Office had the answer. In a detailed brief for Prime Minister John Major for his talks with US President Bill Clinton in February-March 1995, the FCO offered this assessment of Ukraine’s ailments:

“The political and economic situation in Ukraine remains extremely fragile. The government’s unwillingness to introduce reforms has brought the country to the brink of disaster. Hyperinflation threatens to provoke economic collapse.”

The Ukrainian President Leonid Kuchma was of a different opinion. In May 1995 he told the visiting British Chancellor of the Exchequer (Finance Minister) Kenneth Clarke that Ukraine had made good progress to stabilize its economy. However, the country’s balance of payments remained a grave problem. Ukraine was counting on foreign assistance to deal with it. Kuchma pointed out that the 85 million ecu [European Currency Unit that paved the way for the Euro – NG] loan from the EU for the balance of payments support had been agreed, but not yet disbursed. If the European Union spent one year deciding on assistance to Ukraine, then perhaps the EU did not want a stable Ukraine in the “heart of Europe”. The Ukrainian population could see for themselves how much assistance Ukraine had received from EU and form their own view how the EU views Ukraine, Kuchma told Clarke. 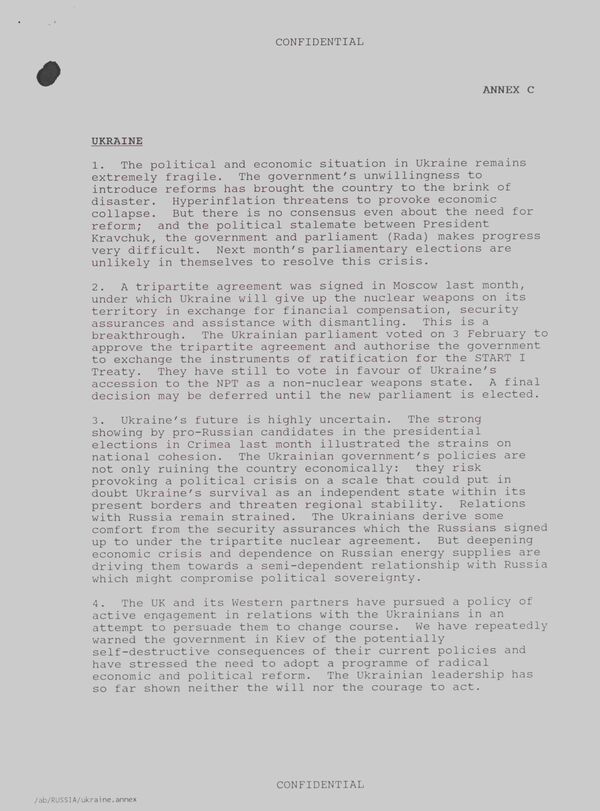 He then, in the words of Clarke, “reeled a list of ‘conditions’ that Ukraine had met for support from the international community. First, they had got rid of nuclear weapons, but still the West asked for more. Then had come NPT accession, and that wasn’t enough. Then they had agreed an SBA with the IMF. Now they had given a commitment to close Chernobyl. They wondered what would be the next condition imposed by the West.”

The European Union should ask itself whether it had an interest in an independent sovereign Ukraine or not, Kuchma said.

“The scale of assistance from the EU was minimal compared to that given by Russia, who had rescheduled USD 500 million of Ukrainian debt in the first quarter of this [1995] year alone. It was understandable that Russia asked why Ukraine wished to adopt such a pro-Western foreign policy.”

The Ukrainian Ambassador in London pleaded with Prime Minister John Major to meet Kuchma in a show of support:

“I think it would be unwise and unfair to leave President Kuchma alone, faced with the immense problems of transition to the market economy or, in general, building a new country. In my view Ukraine really deserves aid similar to the Marshall plan to European countries in 1947-51.” 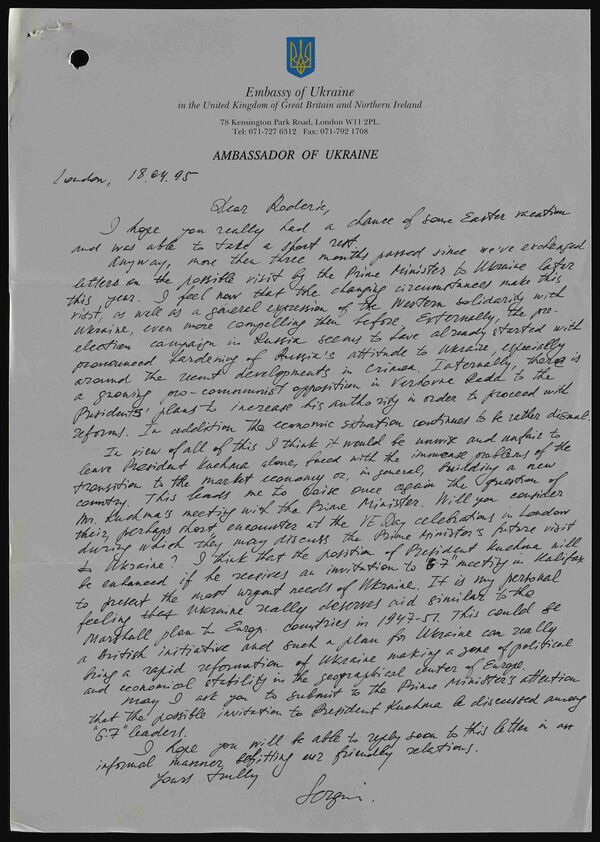 The UK and its Western partners, the FCO lamented, tried hard to help Ukraine but failed to persuade its leaders to change course to set the right conditions for such help to be forthcoming and effective.

“We have repeatedly warned the government in Kiev of the potentially self-destructive consequences of their current policies and have stressed the need to adopt a programme of radical economic and political reform. The Ukrainian leadership has so far shown neither the will nor the courage to act.”

As Her Majesty’s Ambassador in Kiev quipped in his valedictory letter to the Foreign Office on 16 March 1995, in Ukrainian political culture, “Shouting comes naturally. Action less so.”

The FCO verdict was ominous and prescient: “The strong showing by pro-Russian candidates in the presidential elections in Crimea last month illustrated the strains on national cohesion. The Ukrainian government’s policies are not only ruining the country economically: they risk provoking a political crisis on a scale that could put in doubt Ukraine’s survival as an independent state within its present borders and threaten regional stability.”