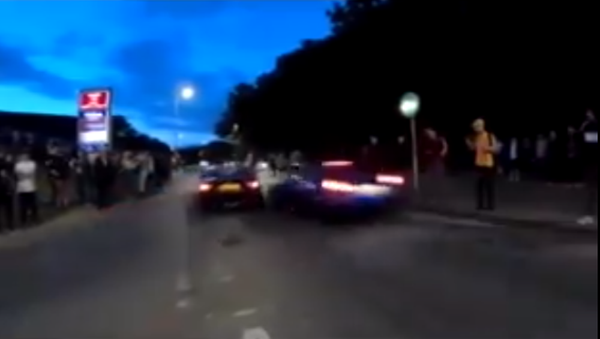 According to multiple reports, two cars crashed into a crowd of people standing at the side of the road during a weekly meeting of members of a modified car club called Cruise Herts.

Multiple people were hurt in the Stevenage crash, with an estimated 10 to 12 people injured and at least 1 trapped as a result of the incident, according to media reports, citing eyewitnesses.

Footage of the incident was shared by witnesses in social media.

So at least 10 people injured, possibly 2 fatal at Stevenage car meet tonight. Not surprised,the ludicrous speeds these guys were doing, Thoughts and prayers to all those involved. #TwitterCarClub pic.twitter.com/oU7m5hDiCm

#Stevenage no you wouldn’t catch me standing there @Speedy_Matt_ pic.twitter.com/e1taVTUYlo

One witness of the crash wrote on Facebook that there "Must be 30+ emergency services on the scene," according to The Sun.

The Daily Mail reported, citing a spokesman for the East of England Ambulance Service, that 12 people had been taken to three hospitals, including the Lister Hospital in Stevenage.

A member of the Cruise Herts official Facebook page administration team expressed sympathy to those involved in the incident.

"I’m sure most of you will have heard the tragic news from tonight’s cruise Herts meet. We are truly shocked and shaken by what has happened and cannot imagine what anyone is going through that is involved. Our thoughts and prayers go out to anyone involved tonight and hope everyone is ok," a post reads.

The car club held an event which was reportedly described as an "extra special meet" to gather money for a charity called 4Louis which provides equipment and training to hospitals and medics involved in the death of a child, according to Daily Mail.