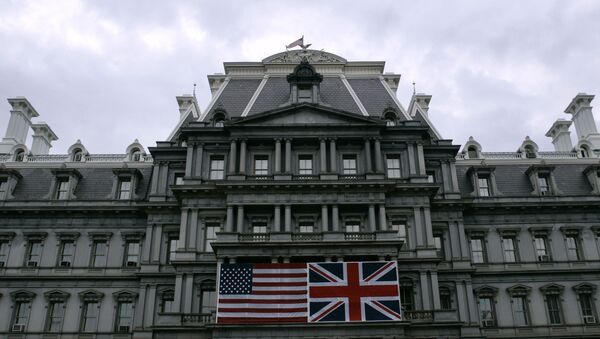 Nikolai Gorshkov
All materials
In the 1990-s UK Government was obsessed with saving its “special relationship” with the US which was widely perceived as having hit the rocks. The bones of contention were policy towards the Bosnian war and search for peace in Northern Ireland as UK Government papers released by the National Archives in London reveal.

President Clinton’s decision to grant US entry visa to Jerry Adams, the leader of Sinn Fein political party in Northern Ireland whom the British Government believed to be top dog in the outlawed Irish Republican Army, the IRA, upset Britain in a big way. The media were having a field day burying the Anglo-American “special relationship”.

The British Government felt it should “Make an effort to remedy the public perception of the present state of the relationship. What unites us is far stronger than what divides us: but we are not succeeding in getting this across to the media”.

The Foreign Office rushed to the rescue. In February 1994 the British Embassy in Washington cabled back home some suggestions on damage limitation in the run-up to Prime Minister Major’s visit to Washington.

“A lot of nonsense is written about the relationship with the United States. There always have been fierce disagreements. Mrs. Thatcher’s telephone calls did not prevent Reagan invading Grenada. In American eyes we manifestly are less important economically than Japan or Germany, but a very high value has always been attached to the politico-military relationship.

“The decision to admit Adams was a bad one. Governments are not in the habit of publicly admitting their mistakes. We were right to react very strongly to the Adams decision: this is an administration that responds to pressure. The President on the rebound is now going out of his way to ensure that the PM’s visit is a public success”. 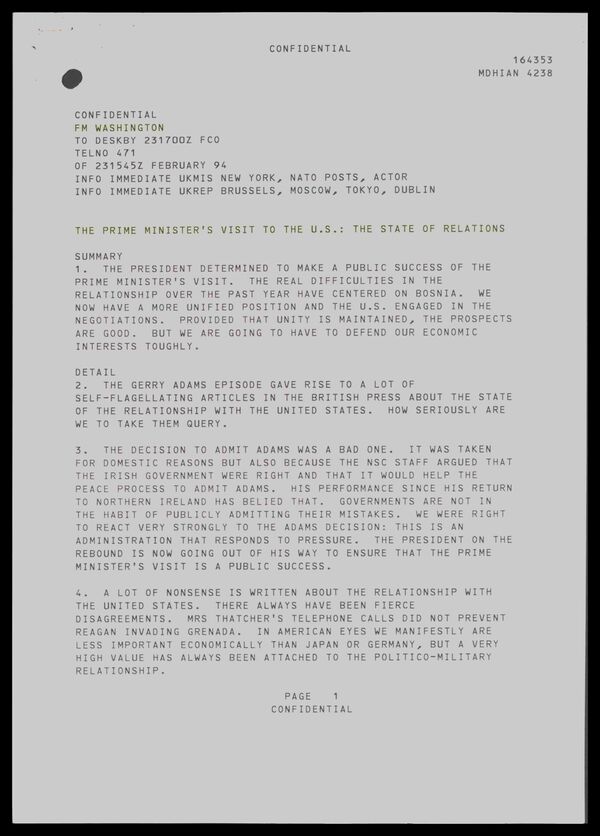 The British diplomats advised the Prime Minister to tread carefully with Clinton. “Avoid recriminations, public or private, over the Gerry Adams visa (an, more generally, to avoid giving Northern Ireland a high profile in public comment on the visit)”.

But the real difficulties in the UK-US relationship over that period centered on Bosnia. “We genuinely believe that the Americans have failed to shoulder their share of the responsibility. They genuinely believe that we have been more resistant that the French to taking the sort of firm action which has now paid dividends around Sarajevo”.

The architect of US Bosnia policy, the National Security Advisor Tony Lake made a point of reassuring British journalists about the health of the “special relationship”, as reported by the British Embassy in Washington:

‘In response to notion that Clinton told Major that IF Britain did NOT go along [on Bosnia – NG] we would change our troop commitment in Europe – FALSE. [A handwritten note on the margin: “Nailing the FT’s lie – again”] 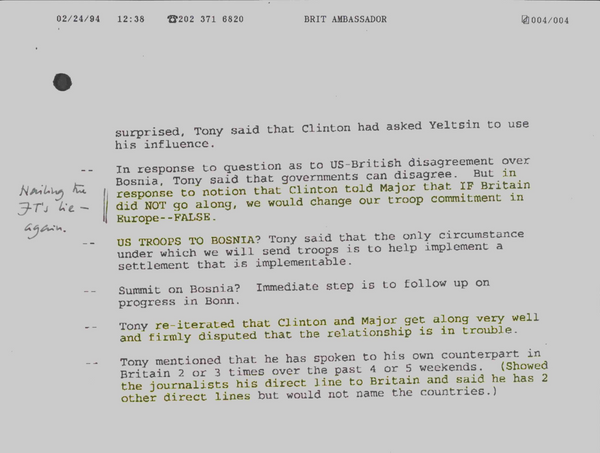 To put an icing on the cake of “special relationship” Lake told a story that chimes with some very fresh developments. “When Clinton read recent news accounts saying that he still harbors resentment over reports from last year that Conservative Party aided Republicans, he first laughed. The second time he saw the reports -- quoting unnamed White House officials he expressed anger that anyone on his staff would say such things”.

Looks like allegations of foreign interference in US elections are not something new and extraordinary… Anyway, the British Foreign Office was not under any illusion as to what “special relationship” really meant for London – “special pleading”.

“The term special relationship is best when it comes from the Americans. From us it sounds like special pleading. That there is an especially close relationship between us cannot seriously be doubted. It is centered on the defence, nuclear and intelligence relationship. It is simply inconceivable that the United States would make its most advanced strategic nuclear deterrent available to anyone else. The value to us of the defence relationship is incalculable and there is not the slightest chance of it being matched or replaced by the development  of European defence structures. The Americans will themselves go along  with the development of these, partly because they would genuinely like  to see the Europeans assuming more of the burden of defending themselves, but with a great deal of skepticism as to how much will be achieved”.

This condescending attitude to Britain’s EU partners is manifest in all British government papers.

“The Americans might think that the Germans have more of an insight into Russia than we do. They would be wrong. We used to offer the Germans Rodric Braithwaite’s [UK Ambassador in Moscow under Thatcher and Major – NG] reporting telegrams because their own were so poor”.

In an early indication a slowly brewing Brexit, the British pitch to the US was: “In defence and trade policy, the UK stands more consistently for an Atlantic-based, free-trading Europe than either France or German. The US should recognise this… Among the mutual benefits flowing from the Anglo-American dialogue, the UK approach to world affairs is not only European and Atlantic based but also global. No other US ally or partner can match that range”.

The pitch was matched by the US Vice-President Al Gore who told Prime Minister Major in Washington that “the “world system” tended to work more coherently in times when the United States was consulting very closely first of all with the United Kingdom. After such consultation, the USA could offer leadership for the allies”.

However, at a biannual EC-US summit on 11 January 1994 President Clinton poured some cold water on UK’s “special” ambitions by telling the press that EC remained America’s most valued partner in trade and investment, and that a strong and united Europe made for a more effective economic and political partner”. Did he sense Brexit brewing?..