It's a Lie, We Never Knew of Interference and Would Never Allow It - Ex-Ecuadorian President Correa 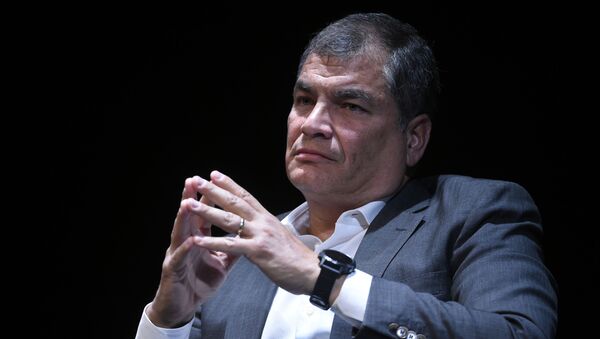 Earlier, CNN published a report based on what it termed "exclusive documents", accusing Julian Assange of meddling in the 2016 US elections. In an interview with Sputnik, Correa shared his perspective on Assange, CNN's 'prejudice', EU-US relations and more.

Sputnik: What do you think about a CNN story claiming that Assange has meddled in the US 2016 election from Ecuadorian embassy?

Rafael Correa: It is already known. This is the same story when the US intended to invade Iraq and media, starting with CNN, created the whole campaign, claiming that there were weapons of mass destruction. So that even good people could applaud the invasion of the country and the war, which claimed more than a hundred thousand lives among civilians, not counting military personnel.

The same was made with Assange. This is all lynching in the media, this is all a show, so that when he is extradited to the US, he could be sentenced to a life term in prison, a disproportionate penalty that even good people may welcome.

It is already a commonly known strategy, an installation, concocted by certain media. We were not aware of Assange’s intelligence activities. They have not proved it in this story. It is merely a show. That there is some video footage where he walks with a bag and now they claim – they know what was inside of this bag…no, this story tells Mueller’s report. That means that CNN in its investigation uses side sources and cannot be responsible for that?

There are two things. First we were shown this. Secondly, we would not have allowed it if we knew of it. Did not prove that it really happened. The same staging that they want to prove, are the claims about spying activity from the embassy, which Assange - together with Russians - made a centre of special operation and that we allegedly knew this and protected him.

First, they have not proved it. I cannot be deceived with this show. Second, it is a lie. If there was any meddling/spying, we would know about it and would never allow it.

Sputnik: Good. So, when you told the government to cut Assange’s Internet access, it was not because you knew that he spied or meddled in US elections?

Rafael Correa: This happened because [Assange] published information that harmed the [US presidential] candidates. I don’t know how he got it. Maybe, he copied it from somewhere – how am I supposed to know? There is a difference between spying on the US Democratic Party, [working with] a Russian hacker from the Ecuadorean embassy in London, or [getting information] from the Internet. What is clear is that he sent messages that harmed Hillary Clinton. And this is wrong. We don’t like when [other countries] interfere in [our] internal affairs. I wouldn’t have liked if a foreign nation meddled in the presidential elections in Ecuador. Just like any other nation, we would not allow it, we respect other nations’ sovereignty.

Assange had been warned several times. He failed to comply with [asylum agreement] terms and continued to publish information that only harmed one side; this was not balanced information about [both] Clinton and Trump. It was only a negative information on Hillary Clinton. We could not accept it. This is why I personally ordered Assange’s internet connection to be cut on 17 October 2016, ahead of 8 November 2016 elections in the US.

Sputnik: What’s your opinion, why is Russia always blamed for everything related to Assange? For example, CNN mentions Russian nationals who visited Assange in the embassy.

Rafael Correa: It’s a geopolitical matter. Yesterday, I had an interview with CNN’s Patricia Ramos, in which she demonstrated the falseness of her prejudice. She considers it a proven fact that the Russian embassy engaged in the operation, but it’s a lie that the Russians were there, it’s a lie.

So, you know, she asked: why didn’t [embassy personal] search those hackers that visited [the embassy], those German hackers?

If you don’t like someone, it does not mean he’s a hacker. Presumption of innocence is a human right. Just because CNN does not like someone, we won’t deny them entry to the embassy and humiliate them with searches. They don’t understand that, they believe themselves the masters of the world. But, obviously, mentioning Russia is geopolitical. In other cases, they would mention China. They are US’s world rivals.

Imagine a different situation; as if an Australian programmer or hacker hid in the UK embassy in [Ecuadorian capital city of] Quito, because he got his hands on confidential information on Russia and China and discovered war crimes committed by these countries.

Imagine him staying [in the embassy] for seven years – they would have already invaded [Ecuador], am I right? And if that man left the embassy, they would have put him a memorial in Washington or next to Big Ben in London. But, since it’s Assange, who got his hands on information about the US, he must be crushed, he must be denied asylum, he must be next to be crucified. This an international double morality.

Sputnik:  Recently, the UK Foreign Secretary said that he would not extradite Assange to any country where his life would be threatened. What is your opinion on this statement?

Rafael Correa: They often play with words. […] Yes, [Assange] won’t receive a death penalty, but, if he gets sentenced to life in prison, or a 30-year term, it’s absolutely [too strict a] measure for what he’s done.

We do not necessarily agree with his actions. We have not granted him asylum because we agreed with his actions. I believe that every country must have confidential information for security’s sake, but it also should not commit war crimes like the US did. Assange was granted asylum because there were no guarantees – and there are still no guarantees – of proper prosecution. In reality, there’s a media lynching going on, there were threats made by US hawks to judge [Assange] in accordance to laws that imply a death sentence.

There is no guarantee of a proper judgement. The British are playing with words a little bit.

Sputnik: Do you think Europe acts as an ally to the US?

Rafael Correa: I think the European Union has a bit more independence now. The world in the 21st century undergoes a sway towards the right-wing, towards liberal capitalism, towards the so-called liberal democracy – if only it was real. A democracy is based on a rule of law, and the law works in someone’s favor.

I will provide the same example I provided earlier: if Assange stole Russia’s and China’s secret documents and hid in the UK embassy in Quito, they would have invaded [our] country if we failed to let him leave to a safe country; they would have also put up a memorial to him as a freedom of speech hero. As long as this international double morality exists, as long as justice works in favor of the strongest, we still have a long way to go towards a real world society, towards real civilizational breakthrough, towards humanism.

Unfortunately, in the 21st century, there is a sway towards double morality, towards principles that are convenient for some. In this sense, Europe has made a step backwards.

It used to be an enlightened continent, an example for Latin America to follow. And now they are often worse than the US, a nation which I respect and admire. The US began its independent existence approximately at the same time as – only 30 years earlier than – the Latin American republics. Why did they develop and we did not? What did they do right and we did not? Obviously, as a hegemon country, its foreign policy – particularly towards Latin American nations that don’t submit – leaves a lot to be desired. Unfortunately, in this sense [the US], matches the EU. That’s very unfortunate, because I adore Europe.

Sputnik: Would you like to add anything that we have not previously addressed?

Rafael Correa: There are a lot of things in [CNN’s] article which - and I insist - depict things as actual and checked, although this is not the case. It appears as if they’ve proven that Assange engaged in espionage - with Russian spies, I think. Do they believe repetition is proof? What proof? Is the Mueller report a big proof? What report? *laughs* It’s like the report which said Iraq had WMDs or those videos where things are shown and God knows what happens to them.

Another part of this montage is to create an impression that we knew [about Assange’s activities]. We didn’t know anything. It does not mean it took place. If it took place, we did not know, because if we knew, we wouldn’t have allowed it. I don’t know how clear it is. Why do they do that?

We remember it well. It’s just the same as what [Lenin Moreno’s] Ecuadorian government did on a national level, all this campaign of hounding Assange, when he was expelled from the embassy in violation of international law, in violation of the Vienna convention, in violation of the Constitution of Ecuador – specifically article 41, which obliges the nation not to give away asylum seekers. Ecuador was humiliated, not only on an international level, but in perspective, for ages to come. The way Ecuador humiliated an asylum seeker will be remembered for ages.

However, before they did that, they engaged in an entire campaign of smearing and conspiring with the media who claimed that Assange is ill-tempered, that he smears feces on the walls, that his cat is spying, etc. It’s nonsense, insanity.

CNN does something similar, but on a slightly higher level: they construct a fake reality so that, when Assange gets extradited and sentenced to disproportionately severe punishment, even the kind-hearted people applauded this giant disgust. It’s a trap and you should be careful not to fall in it. We do remember Iraq’s “WMDs,” which they used to justify an invasion, and the whole world applauded them. And then we discovered it was all a lie.