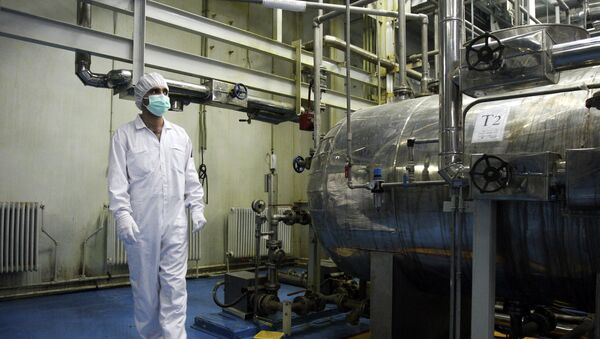 © AP Photo / Vahid Salemi
Subscribe
Last week, Tehran began enriching uranium beyond the limit outlined in the 2015 Iran nuclear deal, also known as the Joint Comprehensive Plan of Action (JCPOA). This followed Iran’s announcement that it had suspended some of its JCPOA obligations, but that it doesn’t want to exit from the deal.

Behrouz Kamalvandi, spokesman for the Atomic Energy Organisation of Iran (AEOI), has not ruled out that Tehran could significantly accelerate the rate of accumulating enriched uranium.

“We have no plan to surpass the 4.5-percent enrichment level; we will stay at this level for now. Enrichment is like a fast train whose next station is 20 percent after the 4.5 percent”, Kamalvandi was quoted by the Iranian news agency ICANA as saying.

At the same time, he underscored that Iran is currently in no need of a 20-percent enrichment rate.

Earlier, Kamalvandi said that Iran has started enriching uranium beyond the limit of 3.67 percent, outlined in the JCPOA and that the country could bring uranium enrichment up to 20 percent as the third step in reducing its obligations under the nuclear deal.

“We do not need 20 percent [enriched] fuel now, but we will produce it if we want to. There are no obstacles and problems”, he pointed out.

On 8 May, Iran announced that it was partially discontinuing some of its obligations under the JCPOA, exactly one year after the US unilaterally withdrew from the nuclear deal and re-imposed wide-ranging sanctions on the Islamic Republic.

Iranian President Hassan Rouhani described Tehran’s move as an attempt to save, not to undermine, the JCPOA.

Iranian Deputy Foreign Minister Abbas Araghchi, for his part, blamed Europe for failing to fulfil its commitments to the Iran deal, adding, however, that "the doors of diplomacy are still open".

The developments come amid growing tensions between the US and Iran, which further escalated after Washington sent an aircraft carrier strike group and additional troops to the Middle East following Iran’s suspension of some of its JCPOA commitments.

Adding fuel to the fire was the downing of a US military drone by Iran’s Revolutionary Guard Corps, something that Tehran claims took place in Iranian airspace, with Washington insisting that the incident occurred over international waters.

000000
Popular comments
Iran is going to take the world by surprise, if there is a war,that is where the world will understand Iran will never let Israel alone have nuclear in the region. They really learn their lessons from Iraq war. I don't think Israel will take part because if they do, iran will use nuclear first, they are not stupid, Israel hide to obtain nukes why can't they do the same. It's my opinion l doubt if Iran don't hve nukes ready to fire in case of any action that will make them defenceless. Surely American intelligence maybe aware of,that is why they are employing tight sanctions to bleed them instead of war, one way or the other,the war will happen because Iran will never go down in drain without retaliation.
S-400
17 July 2019, 18:51 GMT1
000000
Go Iran GO. Next stop full nuclear bomb production. Like they say building 1 nuclear bomb a day will keep the Yankees away.