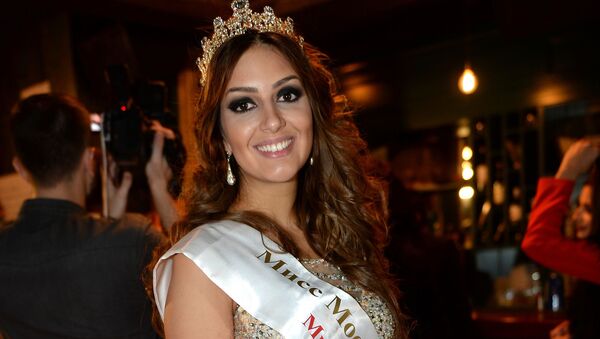 © Sputnik / Ekaterina Chesnokova
/
Go to the photo bank
Subscribe
Russian beauty queen Oksana Voevodina secretly tied the knot with Sultan Muhammad V of the Malaysian province of Kelantan last year. The Malaysian monarch resigned as the supreme ruler of the country shortly after reports about their wedding, fanning speculation that his marriage was the reason for the move.

Friends of Miss Moscow 2015 Oksana Voevodina have confirmed earlier reports that the Russian beauty has divorced Malaysia’s outgoing king, Sultan Muhammad V of Kelantan province, Russian outlet kp.ru reports. The media cited the organiser of the all-Russian beauty pageant “Krasa Rossii” Tatiana Andreeva, said to be the model’s close friend, who revealed that Voevodina has indeed split from her husband and now resides in Moscow. The insider also noted that her friend came to the Russian capital for the beauty pageant final this June already divorced.

The reports about their marriage coming to an end have also been confirmed by an unnamed friend of Voevodina’s family. He insisted that it was not Oksana’s fault.

“I have suggestions how all this happened and why Muhammad did it but I cannot reveal it now”, he said.

The New Straits Times, citing unnamed sources, reported earlier today that the couple filed documents at the Singapore Syariah Court on 22 June. It was finalised on 1 July. There is also said to be a copy of the divorce certificate circulating online, suggesting that it was an irrevocable divorce. It is said to be the strictest divorce in Islam as the couple cannot remarry.

Our wedding celebration in Moscow. I want to say thank you to the people who shared this happy moment with us and were together with us that evening! It was wonderful and beautiful wedding... Наше свадебное торжество в Москве. Отдельно хочу поблагодарить людей, которые разделили с нами это радостное событие и были с нами в этот вечер! Это было очень красиво и празднично...

At the same time, the Kelantan palace has recently issued a statement saying that one needs official confirmation to be called by any of the royal titles. The move is said to be prompted by reports calling the Russian beauty a “queen”. The report by The New Straits Times also suggested that the palace had frowned on her Instagram posts referring to her son from the sultan as crown prince and the “future king of Malaysia”.

“Such unrefined understanding of royal customs is very unbecoming. You need to be a royal in order to be Raja Perempuan Kelantan”, another source is cited to say.

Oksana Voevodina, who changed her name to Rihana Petra and converted to Islam, has been sharing a lot recently on her relatively new Instagram page. She even revealed on her social media that she and her royal husband became parents on 21 May.

Although her Instagram feed is a collection of “happy couple” shots and portraits of her wearing traditional Islamic clothing, some media outlets earlier spread reports of an upcoming divorce. Her father and friends used to dismiss these claims.

The rumours were fuelled by Sultan Muhammad V’s resignation as the supreme ruler of the country on 6 January. It fanned speculation about his marriage being the reason for the move, as the Malaysian rulers’ council refused to crown Voevodina, despite her embracing Islam.

The former model and Sultan Muhammad V made headlines in November 2018 when hints about their lavish wedding ceremony held in the prestigious Moscow suburb of Barvikha emerged. As it later turned out, the ceremony had been held in June 2018.

000000
Popular comments
And now she will proceed to legally steal his fortune.