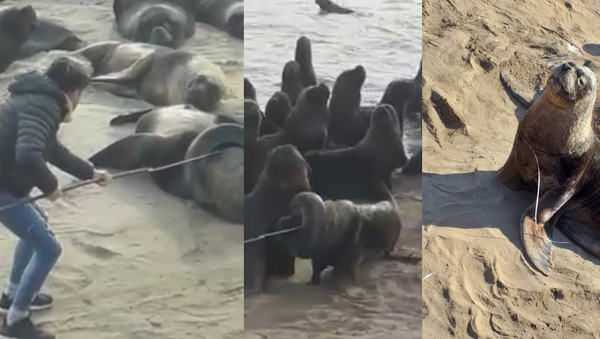 A rough rescue attempt with a happy ending!

While cleaning up the beach on the coast of Mar del Plata, Argentina, last month, animal rescue NGO Fundación Fauna Argentina (FFA) was alerted about a sea lion that had a tire stuck around its neck.

One particular volunteer took it upon himself to bravely jump into the colony of pinnipeds and attempted to remove the tire using a long pole with a hook attached to the end. Unfortunately, the startled sea lion’s resistance and the length of the pole made it difficult to get a firm tug on the tire.

It wouldn’t be until the third attempt on the next day (seen above) that the man was able to successfully free the sea lion from the rubber ring.

According to the FFA’s Facebook page, they continued to remove a massive amount of plastic and other garbage from the shore after the rescue. The group was even able to snap a photo of the sea lion living its new, less restricted life!