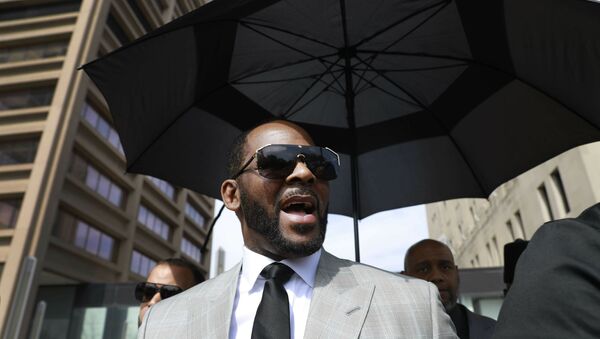 © AP Photo / Amr Alfiky
Subscribe
A federal judge ordered that R&B singer R. Kelly be held without bond in Chicago on Tuesday after the artist pleaded not guilty in connection to newly-filed sex crimes charges.

According to the Chicago Tribune, the federal charges relate to allegations that Kelly paid hundred of thousands of dollars in an attempt to collect "child-sex tapes" and that he reportedly pressured witnesses to alter their testimonies prior to the end of his previous pornography case in the early 2000s.

Kelly reportedly did not speak, except to say that he did understand the new set of charges.

The verdict came moments after federal prosecutors described the singer as "an extreme danger to the community, especially to minor girls" during a hearing.

“This risk of obstruction is real. This risk is ongoing. This risk is heightened by the defendant’s fame and power,” Assistant US Attorney Angel Krull told Judge Harry Leinenweber, before stating that Kelly "has a unique ability to influence and intimidate witnesses and victims, and that continues to this day."

The latest development comes days after Kelly was hit with two new indictments that could ultimately place the musician behind bars for the remainder of his life. In total, he faces a combined 18 counts of alleged crimes against 10 individuals.

Earlier this year, Kelly came under the spotlight after a six-part series, "Surviving R. Kelly," was aired on the Lifetime Network. The docu-series touched on a variety of allegations made against Kelly, many of which detailed his interactions with underaged girls, including his marriage to then-15-year-old popular 1990s artist Aaliyah.