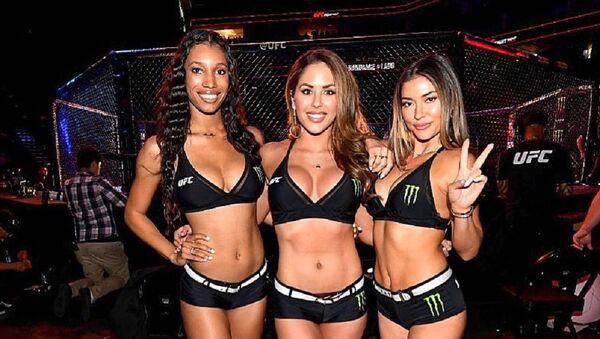 First taken note of back in the 1960s, the long-standing tradition to put attractive women in the octagon or ring between fighting rounds appears to be further gaining momentum, with many models having already made lucrative careers in the field.

Abu Dhabi will soon see a grand event that is much awaited by MMA fans – a UFC tournament with Russian star Khabib Nurmagomedov scheduled to partake. The organisers of the 7 September event have already stated that they are not going to adapt traditional, long-standing MMA standards and entourage, including the specially selected ring girls to carry placards with round numbers on to the ring, to the Muslim culture of the hosting country – and the fans seem to already be prepared to rejoice.

The commercial success of a sporting event of this scale is regarded as not only being due to the boxing or MMA stars’ performance, but also the bombshell appearance of the so-called ring, or octagon, girls. Notably, the dress code, although it is largely determined by the bikini (let’s put it that way) standards of the MMA titan UFC, varies from country to country, and can even stipulate wearing evening dresses, like at events organised by the Russian boxing promoter Absolute Championship Akhmat. Alternatively, it can even be smart suits.

Whatever the debate about the ring girls’ outfits, or if they should appear at all at the sporting venue boasting their usually extraordinary physique while the tournament’s focus is men fighting, quite a few names have already entered history, in part thanks to social media.

All black everything, LOVE my new @mvmtforher watch. Definitely gonna be a staple in my cage side attire 🙌🏼 use 'BP15' at checkout if you see anything you like - it's 15% off their entire site! @mvmt #jointhemvmt

The first mention of bikini-clad girls employed during MMA or boxing championships dates back to 1965, when the well-known US Ring Magazine posted a picture of a Las Vegas event where the plaque with the round number was being raised by an attractive girl wearing a bikini who entered the ring to the applause of the largely male audience.

The octagon girls, whose royalties reportedly amount to about 30,000 dollars per year in Europe and the US, are sometimes even claimed to steal the limelight from the competing athletes at major events.