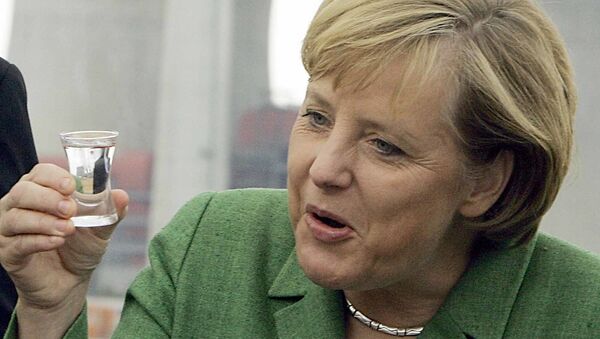 Despite the fact that the chancellor's apparent health problems have manifested themselves on multiple occasions during meetings with other politicians, her office has repeatedly refused to elaborate about the cause of these episodes.

In an interview with the Russian daily newspaper "Komsomolskaya Pravda", member of the Bundestag from the party Alternative für Deutschland, Petr Bystron, has shared that due to the ongoing silence from Chancellor Angela Merkel's office about her "shaking episodes", rumours are spreading about the chancellor's condition.

"We have already witnessed three cases showing Merkel's illness lately. Obviously she has health issues. […] In the Bundestag and in German society in general rumours are circulating saying that the "chancellor's shaking" is allegedly a sign of her alcoholism or Parkinson's disease", the member of the parliament said.

Bystron further argued that the information vacuum around Merkel's health issues doesn't benefit anyone in the country leaving it unprepared and uninformed about the chancellor's capability to continue to fulfil her responsibilities.

He argued that a medical examination of Merkel's health is needed and added that for now her condition resembles the overall state of the EU – "problems are obvious, but in both cases they are ignored". However, a recent poll showed that around 60% of German citizens disagree with Bystron, believing that health issues are Merkel's private matter. Notably, the rumours, suggesting that the German chancellor is suffering from the consequences of excessive alcohol consumption, have indeed been surfacing on social media since Merkel's shaking was first witnessed on 19 June.

"Merkel runs around with a wine glass at every opportunity. Someone once told me that if someone sticks to glasses like this, it is a sign of alcoholism", a user named "pro Besitzbürgertum" wrote on Twitter.

Some netizens, however, brushed off such accusations as "indecent" claims of right-wing parties and compared them to claims by one of the Green party's chiefs, Annalena Baerbock that Merkel is suffering from the results of climate change.

Bystron's statement comes in the wake of the most recent "shaking episode" that struck Merkel as she was meeting Finnish Prime Minister Antti Rinne in Berlin. Video captured by media outlets showed the chancellor shaking, while standing alongside Rinne, with the tremor instantly disappearing once the two started walking again.

The first time she was spotted in such a condition was while meeting Ukrainian President Volodymyr Zelenskiy on 18 June. Merkel explained that she suffered from intense heat outdoors and recovered after drinking at least three glasses of water. However, the episode happened again, when the chancellor was meeting German President Frank-Walter Steinmeier on 27 June indoors.