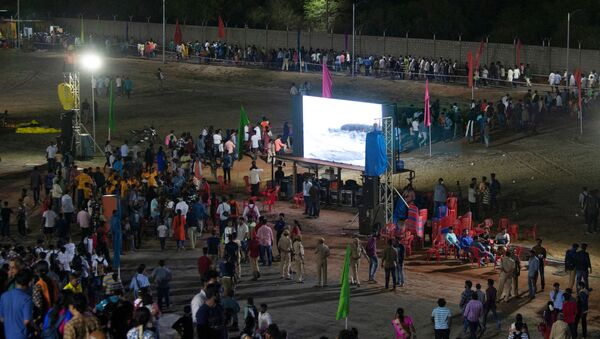 WASHINGTON (Sputnik) - Friendly competition between India and China in space may generate technological advances and ultimately push spacefaring nations to join forces in new endeavours, as has been the case with Washington and Moscow, Rod Pyle, a space author and historian who has worked with NASA, told Sputnik.

"While there is always an urgency to fly on time, and while there is also what some might call a ‘friendly rivalry’ between India and China in terms of space accomplishments, it cannot compare to the white-hot rivalry between the United States and the Soviet Union in the 1950s and 1960s. And yet, what came of that rivalry were incredible technological advances on both sides, and ultimately cooperation in spaceflight," Pyle said.

In particular, Pyle pointed to India as a potential candidate to join other space nations that have flown humans into space.

"I have long been impressed with the advances of India in both robotic and human spaceflight. Their first mission to Mars, the Mars Orbiter Mission, flew in 2014, and they were successful on that first attempt--robotic Mars missions have a roughly 50 percent failure rate. Their lunar missions have also been impressive and performed at a far lower price than equivalent programs in the West. And, of course, they plan to fly humans into space within two years," he noted.

According to the expert, India’s latest launch delay, even though not heartening, is no critical since "it is far better to launch late than to lose a rocket."

"Both the USA and Russia have been flying large rockets since the 1950s, and both nations still experience launch delays and failures from time to time. I did note that the delay of Chandrayaan 2 was attributed to the launch vehicle and not to a fault in the probe itself, so that's presumably something that the engineers will be able to fix in short order on the GSLV booster," Pyle pointed out.

He expressed confidence that the Indian Space Research Organisation would ultimately launch the mission when it would be ready and certain that "it has the best chance to succeed."

In general, he reiterated that "it's gratifying to see other nations such as India and China joining the human spaceflight ‘club.’"

"I join Buzz Aldrin [US astronaut who became the second human to land on the Moon during the Apollo 11 mission] in the hope that the prominent spacefaring nations can one day soon join forces to take humans back to the moon and on to Mars in peaceful cooperation," he concluded.

The interview came soon after India called off the much-anticipated launch of its Chandrayaan-2 lunar mission less than an hour before the scheduled liftoff on Monday due to what it said was a "technical snag." India has long been seeking to become the fourth nation, along with the United States, Russia and China, to land on the Moon, but the historic mission has been suffering delays since April 2018.

Despite the latest incident, the expert highly assessed India’s ambitious space program, expressing the belief that the "friendly" competition in space will only facilitate new breakthrough in space explorations and ultimately encourage cooperation.

Space has indeed been an area of not only permanent rivalry but also cooperation, with Russian-made spaceships Soyuz used to deliver US astronauts to the International Space Station and Russian-built RD-180 engines powering the first stage of the only US vehicle capable of sending heavy payloads being among such examples.