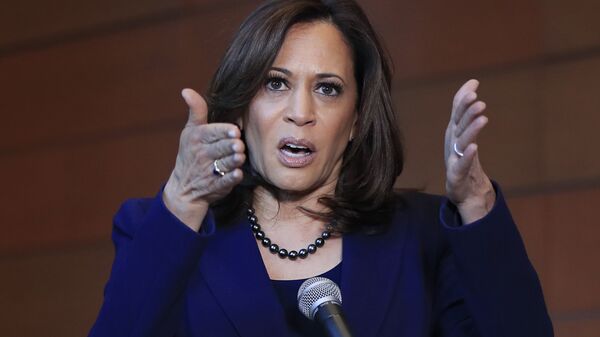 Senator Kamala Harris, who is running for the Democratic nomination for US President in the 2020 election, has been exploiting the issue of foreign interference in elections, and claims her campaign "already knows" it is being targeted by Russian bots.

Sen. Kamala Harris (D-Calif.) has pointed the finger at “Russian trolls” being to blame in the controversy around national anthem protests by former San Francisco 49ers quarterback Colin Kaepernick, adding it wasn’t even a “thing” until the bots fanned the flames on social media.

Harris was speaking on Friday’s edition of "The Breakfast Club" radio show, where she embarked on a rambling tirade against alleged Russian interference in the 2016 election, claiming igniting racial animosity was a tool the online trolls resorted to in sowing discord in US politics.

"They test out a couple of things to see what can get the American public going at each other, pointing fingers at each other", Harris said. Guess what gains the most heat? Race".

At this point in the interview Harris shifted focus on the divisive national debate that exploded in August 2016 when quarterback Colin Kaepernick first opted not to stand during the national anthem. 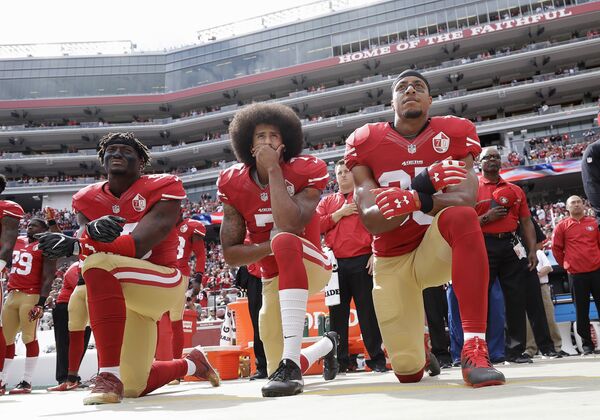 from left, San Francisco 49ers outside linebacker Eli Harold, quarterback Colin Kaepernick and safety Eric Reid kneel during the national anthem before an NFL football game against the Dallas Cowboys in Santa Clara, Calif. Since Kaepernick announced he would not stand for the song in protest of racial discrimination against blacks in the United States, many performers are now rethinking offers to sing the national anthem.
© AP Photo / Marcio Jose Sanchez,

"Remember the heat that ended up around the 'bend the knee' and Colin Kaepernick? Many smart people have said it actually was not a thing, the Russian bots started taking that on".

Twitter users took to social media to air their views on this renewed attempt to exploit the old issue of “Russian meddling”:

One user tweeted: “So, the Russians are now the dog that ate your homework. Default excuse for any rejection of socialism and anti American activism".

Another idiotic democrat claiming that I am unable to make up my own mind about anything without russia influencing me? Is she trying to be as stupid as OAC? What is with all of these women embarrassing women?

So, the Russians told Colin to kneel & he was following orders? Lame! He was cause if his controversy.

So, the Russians are now the dog that ate your homework. Default excuse for any rejection of socialism and anti American activism.

​Another wrote: “Is she insane?”

SonRussians are now to blame for absolutely everything?
I’m a Republican, and there are only few democrats I can feel a little respect for them, Kamala Harris was one of those, I mean WAS, she’ve lost all my respect

​Colin Kaepernick became larger than football since he refused to stand two years ago as the national anthem played before NFL games, with a photo of him seated on a bench going viral on social media.

He said he did so to protest police shootings of African-American men and other social injustices faced by black people in the US.

Senator Harris, who in January officially announced her campaign to run for the Democratic nomination for President of the United States in the 2020 election also said her campaign "already knows" it is being targeted by Russian bots now, and discussed ways for Americans to counter Russian bots on social media.

On the campaign trail Harris has been flogging the issue of foreign interference in US elections, co-sponsoring a bill introduced by Dianne Feinstein and Richard Blumenthal aimed at combatting alleged foreign threats targeting the election.